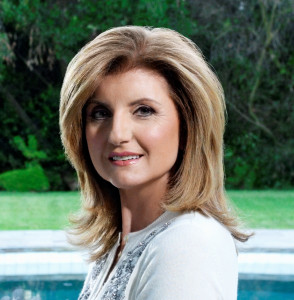 “The ‘Third Revolution’ is changing the world that men have designed. It’s not sustainable. Sustainability is not just about the environment, it’s personal sustainability.” ~Arianna Huffington

Originally from Greece, Huffington moved to England when she was 16 and graduated from Cambridge University with an M.A. in economics. At 21, she became president of the famed debate society, the Cambridge Union.

Huffington is now the chair, president and editor-in-chief of the Huffington Post Media Group and a nationally syndicated columnist. In May 2005, she launched The Huffington Post, a news and blog site that quickly became one of the most widely read, linked to and frequently cited media brands on the Internet. The site won a Pulitzer Prize for national reporting in 2012.

The mother of two daughters also serves on several boards, including EL PAÍS, PRISA, the Center for Public Integrity, and the Committee to Protect Journalists.

Working for BELLA has given me the opportunity to connect with many remarkable people, including Agapi Stassinopoulos, Arianna’s sister, whom I had the pleasure of meeting and interviewing for a feature article last year. She happily connected me to Arianna, and while gathering information for this interview, I was pleasantly surprised to learn that not only do Arianna and I share the same birthday (July 15th), but we are also often compared to Athena, the Greek Goddess of wisdom, courage and inspiration.

Undoubtedly, you will continue to hear and read a lot about how influential Arianna Huffington is in our political and media arenas. Her conversation, however, has shifted. She has become an advocate for being present in one’s life and redefining success so that it includes health, love and giving. 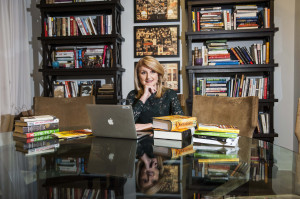 You are known worldwide: You founded The HuffingtonPost.com and have written numerous books, yet you owe your “wake up call” for living a fulfilled life to a fall and broken cheekbone. How do you define success today?

In 2007, I collapsed from exhaustion and lack of sleep, hitting my head on the corner of my desk, cutting my eye and breaking my cheekbone. In the wake of my collapse, I found myself going from doctor to doctor and brain MRI to CAT scan to echocardiogram to find out if there were any underlying medical problems beyond exhaustion. Doctors’ waiting rooms, it turns out, were good places for me to ask myself a lot of questions about the kind of life I was living.
I was on the cover of magazines, and had been chosen by TIME as one of the world’s 100 Most Influential People. But as I was rushed to the hospital after my fall, I had to ask myself, Was this what success looked like? Was this the life I wanted?
Since then I have made many changes in the way I live my life and have arrived at a new phase that has breathing spaces, a deeper perspective and daily practices to keep me on track –– and out of doctors’ waiting rooms! 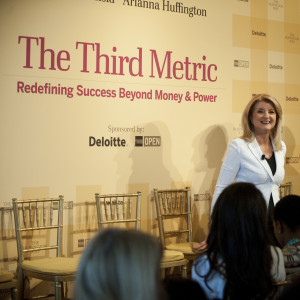 You’ve been leading “The Third Metric” global conversation. Please explain what this movement is about.

The Third Metric is about the need to redefine success at a time when our society’s notion of success has been reduced to money and power. In fact, at this point, success, money and power have practically become synonymous in the minds of many. This idea of success can work –-or at least, appear to work –-in the short-term. But over the long-term, money and power by themselves are like a two-legged stool: You can balance for a while, but eventually you’re going to topple over. And more and more people – very successful people – are toppling over.
I first expressed these thoughts in a May 2013 commencement address to the women graduates of Smith College, and it just grew and grew. Last June, we hosted our first-ever Third Metric conference at my apartment in New York, and we followed closely with similar events in New York, London, Munich and Hawaii, discussing the need to redefine success beyond money and power to include our well-being, wisdom, and capacity to wonder and to give. At the same time, we are building the Third Metric into a major editorial initiative on The Huffington Post, tapping into a widespread desire among readers to redefine success and live the lives we want, not just the lives we settle for, and move beyond burnout, sleep deprivation and driving ourselves into the ground.

Why is it important to tie in social good into our business, careers, lives?

Giving doesn’t just benefit others: we grow spiritually by what we give.  And as giving becomes part of us we discover that like a muscle, the more we exercise it, the stronger it gets. More and more companies are recognizing this, and it’s a reason I joined the B Team, a global group of business leaders urging others to “prioritize people and planet alongside profit” and to move beyond our obsession with quarterly earnings and short-term growth.
And it’s not just businesses. My experience volunteering with my daughters in Los Angeles and Washington, D.C., has made me passionate about children volunteering with their families. I dream of a day when families look at their weekend plans and say: What are we going to do this weekend – are we going to shop, see a movie, volunteer? A day when volunteering is just a natural thing – not something exceptional or something that makes us feel particularly noble. Just something that we do … something that connects us with each other.
I’m also interested in supporting the giving efforts of millennials, so I have been supporting Ignite for Good, which has been doing great work by engaging them in different ways of giving, both to their communities and around the world. 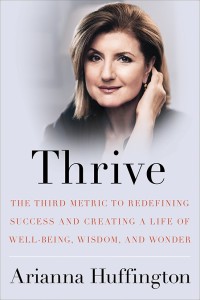 What are you sharing with us in the pages of your 14th book, “Thrive”?

“Thrive” is designed to help us move from knowing what to do to actually doing it. As I know all too well, this is no simple matter. Changing deeply ingrained habits is especially difficult. And, when many of these habits are the product of deeply ingrained cultural norms, it is even harder. This is the challenge we face in redefining success. This is the challenge we face in making Third Metric principles part of our daily lives.
The book is about the lessons I’ve learned and my efforts to embody the Third Metric principles – a process I plan to be engaged in for the rest of my life. It also brings together the latest data, academic research and scientific findings that I hope will convince even the most skeptical reader that the current way we lead our lives is not working and that there are scientifically proven ways we can live our lives differently – ways that will have immediate and measurable results on our health and happiness. Since I want it to be as practical as possible, I have also included many daily practices, tools and techniques that are easy to incorporate into our lives. These three threads are pulled together by one overarching goal: to reconnect with ourselves, our loved ones and our community – in a word, to thrive.

Huffington believes success should include the values of well-being, wisdom and kindness. She hopes that “Go-getters, will become ‘go-givers’!”

“Thrive: The Third Metric To Redefining Success And Creating A Life Of Well-Being, Wisdom and Wonder” will be available from Crown this month (March 2014).
To learn more, visit HuffingtonPost.com.

B. Human by BELLA Magazine: Aiding In The Fight To End Child Trafficking