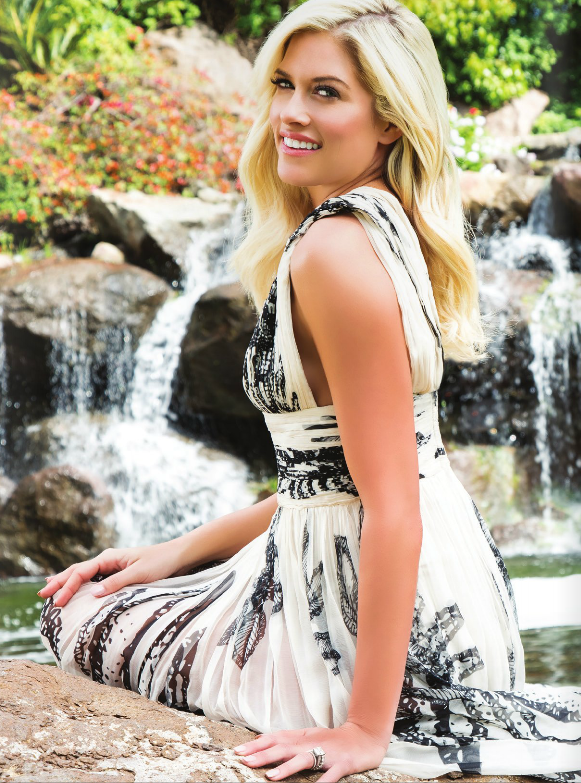 A former wrestler and current star of E!’s hit show “WAGS” (Wives and Girlfriends of Professional Athletes), Barbie Blank is taking the world of entertainment by storm.

At first glance it’s hard to envision this blonde beauty mixing it up in the ring, a profession she never dreamed of as a child. “Never in a million years did I think I was going to become a wrestler,” says Blank. “But when I got the opportunity to join the WWE I knew I was going to perfect this. I wanted to be the best.”

Becoming a wrestler might have come out of left field for Blank, but athleticism has been part of her life since childhood. Involved in competitive sports at a young age, the future star had her sights set on becoming an Olympic gymnast. Though she soon realized that wasn’t going to happen, her athletic background provided an advantage when she stepped into the ring.

“When girls come into the WWE as models and with no athletic background, they don’t last,” she says. “We’re doing things that the normal body should not be put through, so you have to be used to that type of training.”

Just before she got involved in wrestling, Blank was in her first year of college, majoring in broadcast journalism. She was also modeling on the side, which served as the catalyst to a whole new career.

“I received a call from my agent asking if I was interested in wrestling,” says Blank. A fan of the sport growing up, she was open to the idea. After a week of tryouts in Atlanta, she got the call that would ultimately change the course of her life.

Support from her family made it easier for her to not only try out, but also to accept the offer and move out of her home state of Florida. While her mom was never a fan of wrestling, she gave her blessing. “My whole family has supported me 100 percent, and I couldn’t have done it without them,” says Blank.

To fans she is known as Kelly Kelly, a ring name given to her on her first day by Vince McMahon, a legend in the world of wrestling. Blank says her name was derived from an episode of “Cheers” in which Woody Harrelson’s character sings the “Kelly Song.” “Vince came out of a meeting and my name was decided,” she says.

As part of the WWE for almost seven years, Blank was motivated by her fans and the response she elicited from the crowd each time she stepped into the ring. “The audience gave me all the confidence in the world; it’s what drove me to get in there and give it my all,” she says.

Even with their support, Blank says she was nervous every time she stepped out from the curtain: “There was a trash can ready just in case I got sick from nerves.”

In 2013, Blank made the decision to retire. “I saw these guys and girls who were doing it for so long and their bodies were in such bad shape,” she says. “I did not want that to be me.”

With numerous other factors involved, Blank was ready to move forward. Being on the road constantly made it difficult to spend time with her boyfriend (now husband), former professional hockey player Sheldon Souray, who at the time was still playing in the NHL. “In my heart I knew it was time,” she says.

When asked if she would consider a return to the ring, Blank doesn’t rule it out. “I do miss the fans and performing,” she says. “I’ve always said I’d love to come back for one more run.”

These days, Blank has her hands full with new business ventures. In August 2015, she made her debut alongside six other women in the reality show “WAGS.” The show chronicles both the personal and professional lives of the wives and girlfriends of professional athletes.

Going into the show, Blank was a bit nervous about being portrayed in a negative light, or the effect it might have on her relationship. But after talking with Souray and receiving his complete support, she decided to give it a shot.

With the second season set to air this summer, Blank’s experience thus far has been great. “It’s given me the chance to entertain and be on TV again,” she says. It’s also been a good opportunity for fans to see her life outside of the WWE.

This new season will show a shift within the girls, and of course there promises to be drama among the group. For Blank, that’s the tough part. While drama is par for the course on reality TV, she says she doesn’t like fighting with anyone. “I know it has to happen and that I have to stick up for myself,” she says. As a result, she says it’s actually helped her build confidence and deal with issues as they arise.

Season two will also focus on Blank’s wedding and all the planning that went in to the big day. This past February she married the man of her dreams in Cabo San Lucas, Mexico, a spot that holds special meaning for the couple.

“We chose that island because it’s where we went on our first vacation,” says Blank. “And we both wanted to get married on the beach, so it was the perfect choice.”

In addition to the show, Blank is extremely dedicated to fitness and living a healthy lifestyle. A little over a year ago she partnered with the owners of Lynx Fitness to become a co-owner and face of the brand. Through the use of the Lynx Board, a high-energy, low-impact device that targets the core, fitness buffs can achieve their goals at home, in the gym, or even while on the road.

Looking ahead, she is open to the endless possibilities, whether acting, modeling, or fitness. A natural athlete who loves a challenge, Blank says she would love to be part of “Dancing With the Stars.”

“I’ve wanted to do the show for so long,” she says. “I’ve seen former wrestlers and now reality stars competing; I want to be next.”

Wherever her career leads, Blank promises to stay true to herself.

“I’m still the same girl and I haven’t forgotten where I came from,” she says. “My parents instilled those values, and I will carry them throughout my life.”