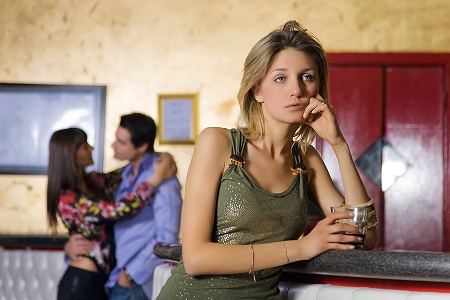 A common affliction that has been plaguing women and men for decades, mostly women, has been on the rise.

Those afflicted experience embarrassment, shame, and sadness. The worse they feel, the more the disease is exacerbated. There are clinics and support groups, countless books and specialists, and even reality shows to tackle the problem. If it gets severe enough it might lead to self-doubt, anxiety, sleepless nights, depression, and could even land you in therapy or to take medication. There are both acute and chronic cases. The disease elicits sympathy from family and friends, and maybe even the clerk at your local dry cleaners. No one wants to catch it and everyone wants to cure it. Wondering why you haven’t heard of this disease yet? You have, and it’s called Being Single.

Folks, I’ve got news for you. Being single is not a disease and it does not mean the person is flawed or inferior. Yet, people are quick to jump to an explanation that offers a reason why someone is single. “He’s too picky,” or “She looks good and is single, so she must be psycho or bitchy,” for example.

Sure, maybe in some cases there’s an obvious reason why someone is single and they might sabotage relationships, but the vast majority of the time, being single is by choice. It’s only thought to be a problem in society because of assumptions that are made that people should be in a relationship, or should be married or have kids by a certain age. This societal pressure along with biological factors weigh heavily on this. There’s no doubt, being partnered has its benefits: it provides security, someone to grow old with, someone to take care of you, a partner to have kids with, and of course, love. But that doesn’t mean not being married is a problem.

A client of mine recently told me how he’d been asked to be set up by acquaintances four times in the past two months. It’s great that people are thinking about him, however, one must wonder about their motivation. Do they take pity on him and feel compelled to think of any single person they know to introduce him to, or do they actually think he has some fine qualities and that the other person does too and they’d hit it off?

I tend to think that people are motivated to rid others of single-hood, which is fine. But, society needs to change their view of it. Just as it would be inappropriate to ask married people why they’re married, it’s probably not the kindest thing to ask someone why they’re single, at least with the assumption that something must be wrong with them. Rather than see it as a problem that needs to be addressed or solved it should be viewed as a choice. People should make a distinction between what is a problem, and what isn’t. An inability to support oneself, debt, violating the law, poor health, and drug and alcohol issues are real problems and worthy of intervention, but being single isn’t.

To learn more about healthy living, check out my book, BE FEARLESS: Change Your Life in 28 Days.

Written By
BELLA Magazine
More from BELLA Magazine
BELLA was backstage getting you all the Behind the Scenes beauty scoop at J....
Read More