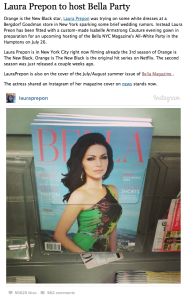 Orange is the New Black star, Laura Prepon was trying on some white dresses at a Bergdorf Goodman store in New York sparking some brief wedding rumors. Instead Laura Preon has been fitted with a custom-made Isabelle Armstrong Couture evening gown in preparation for an upcoming hosting of the Bella NYC Magazine’s All-White Party in the Hamptons on July 26.

LauraPrepon is also on the cover of the July/August summer issue of Bella Magazine .

The actress shared an Instagram of her magazine cover on news stands now.

SLATE CELEBRATED ITS 20TH ANNIVERSARY WITH A BLOWOUT BASH

10 Energy Suckers That Will Drain You, If You Let Them!