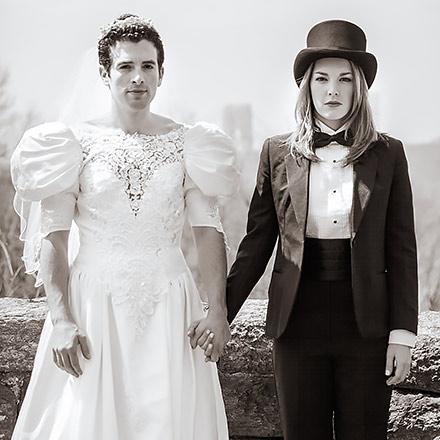 It’s not often you get the opportunity to see two Broadway stars perform side by side in a cabaret setting. It’s even rarer when the two are married.

Broadway veterans Jarrod Spector and Kelli Barrett, who tied the knot last fall, will take their two person act, “This Is Dedicated: Music’s Greatest Marriages,” to Feinstein’s/54 Below on October 20-24. The captivating talent of these two performers, coupled with one of the city’s most intimate venues, makes this a “must see” event.

Tony Award nominee Spector has starred in both Jersey Boys and Beautiful, while Barrett recently originated the leading role of Lara in Broadway’s Doctor Zhivago. She also appeared on Broadway in Wicked and Baby It’s You!

Recreating songs birthed from the greatest marriages, from Barry Mann and Cynthia Weil to Beyonce and Jay-Z, the themes of love, heartbreak, triumph, and despair infuse not only these incredible songs but also the storied partnerships themselves. The night celebrates marriage as the powerful force behind this timeless music and tackles the difficult questions behind keeping it all together.

Feinstein’s/54 Below, Broadway’s Supper Club, offers a unique New York nightlife experience, combining performances by Broadway’s best with fine dining in an elegant setting. In many respects Feinstein’s/54 Below is a throwback to the famed New York City cabaret days of the 1950s when notable performers began their careers in such venerable supper rooms as the Versailles and the Empire.

Steps from Times Square at 254 W. 54th St., the club is a home away from home for performers and audiences alike. With pre-theatre dinner offered nightly from 5 p.m., the club offers an array of delectable entrees that are sure to please even the most discerning palates.

In June of 2012, the club opened under the name 54 Below. The space underwent a complete reinvention which also brought together creative artists and designers to launch and oversee this only-in-Manhattan nightspot. Recently, through a creative partnership with Michael Feinstein, the Ambassador of the American Songbook, 54 Below was renamed Feinstein’s/54 Below.

The club features up to three shows nightly as well as a late night lounge. With comfortable seating for 134 people in the main dining room, all tables are no more than 24 feet from the stage.

So come hear the music play, come to the cabaret.

WHY DID YOU DECIDE ON FEINSTEIN’S/54 BELOW?

I’ve had the pleasure of performing there before and have really established a close relationship with the people at the club. Eric Michael Gillett, the show’s director, and Adam Ben-David, the musical director are wonderful to work with and very talented.

DO YOU REHEARSE AT HOME WITH KELLI?

There are so many variations of what rehearsal is, but we do rehearse at our apartment in Harlem along with other venues.

HOW DID THE SHOW’S CONCEPT ORIGINATE?

We are always talking about doing a show together and this concept of the music of husband and wife teams was a natural fit.

HOW DID YOU MEET KELLI?

We met doing a reading of Piece of My Heart in 2010. We then met again at a reading and became really close friends before we started dating.

ARE YOU TAKING TIME OFF FROM BEAUTIFUL?

Just this week but will be back right after that. Both Kelli and I take the responsibilities that come with performing on Broadway very seriously and always try to honor our commitment to the show and to the audience.

WHEN DID YOU KNOW YOU WANTED TO BE A PERFORMER?

That was kind of decided for me, and I began taking voice lessons before I was three years old, and was on television shortly afterwards. I landed a role on Broadway at age nine.

HOW WOULD YOU DESCRIBE YOUR VOICE?

I guess you can say I’m a rock tenor. However, my voice has been inspired by a wide variety of musical backgrounds, from the classic sounds of the Great American Songbook to the Beatles and Billy Joel. In order to keep my range I need to stay in good physical shape, much like an athlete does. I’ll warm up before I go on stage for about 30 minutes using techniques that I learned from an opera coach.

ARE YOU NOW RECOGNIZED ON THE STREETS OF NEW YORK?

Broadway is much different from movies and television. Once you’re two blocks from the theater you’re not recognized by people on the streets, especially in a city as big as New York. I like that about the city.

Written By
BELLA Magazine
More from BELLA Magazine
After months of travel shut down people are beginning to book their...
Read More