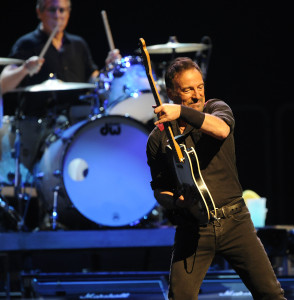 When it came time Sunday night to close out his latest round of touring Bruce Springsteen and all 18 members of the E Street Band did not fall short of keeping the packed house at the Mohegan Sun Arena engaged for what fans were calling, “One of Bruce Springsteen’s best shows to date!”

The 9,200 capacity arena at Mohegan Sun created a somewhat intimate environment were die-hard fans packed in and had an opportunity to be apart of this epic show. Everyone was on their feet the entire night dancing and at times fist pumping to this legends iconic classics, with the Boss proving age is just a number.

Some of the show highlights: 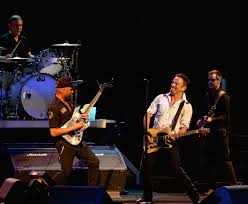 Rage Against the Machine guitarist, Tommy Morello joined the E Street Band adding that dangerous rock-star appeal by shredding with his teeth. 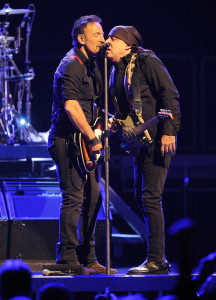 Guitarist Steven Van Zandt was up front and present for the closing weekend performance, bringing his personal touch and antics to the stage. Also, Van Zandt’s wife, Maureen, was pulled from the audience late in the show to serve as Springsteen’s partner for Dancing in the Dark. (Originally Courtney Cox was casted for the dance sequence in the video, you remember…don’t you?)

Bruce took multiple audience requests: “Santa Claus is Coming to Town” (requested by a young girl with a sign); “Seven Angels,” and “Don’t Look Back,” recorded in 1977 for the “Darkness on the Edge of Town” with cords learned quickly on stage by the band. “Breaking out all the oddities tonight,” Springsteen explained. 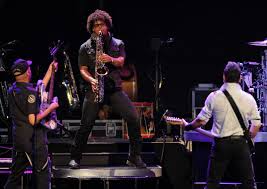 Saxophonist Jake Clemons, the nephew of the late Clarence Clemons, performed and after “Jungleland,” the young Clemons was visibly overwhelmed with emotion and received a consoling hug from Springsteen on stage before the song even ended.

Springsteen then warmly thanked his band members off stage one by one, to close the show with Dream Baby Dream. Supported only by a trio of vocalists, before saying his closing words, 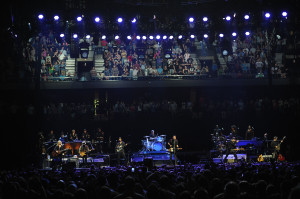 Written By
BELLA Magazine
More from BELLA Magazine
Girls on the Run NYC This Brooklyn-based organization was created to inspire...
Read More