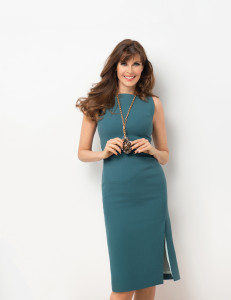 Despite her reputation as one of the most famous supermodels in the world, Carol Alt is surprisingly down to earth. Sure, she has graced the covers of more than 700 magazine covers and appeared in numerous commercials, TV shows and movies, but in many ways Alt is still the same girl who grew up in a close and loving home in College Point Queens, New York.

Today at 53, Alt not only looks decades younger, she also seems to have boundless energy. In September, she joined the Fox news channel as host of “A Healthy You and Carol Alt,” and in February, Alt appeared in the 2014 Sports Illustrated Swimsuit Issue in honor of the magazine’s 50th anniversary.

Alt, who credits her enduring beauty and radiant health to the raw food lifestyle that she adopted over two decades ago, recently spoke with BELLA NYC about what she hopes to accomplish with her new television show, and how she discovered a personal road map leading to the fountain of youth.

Your Saturday afternoon show, “A Healthy You and Carol Alt,” has covered a vast array of health topics ranging from the dangers of artificial sweeteners to magnetic field therapy. What do you hope viewers will gain from watching the show?

I have a wide variety of health experts on the show and I try to ask the questions my viewers would ask. I hope to empower viewers to be their own health advocate, and to make good treatment decisions. The show not only covers Western medicine, but also introduces viewers to alternative medicine possibilities such as using a drinkable aloe vera juice to cure heartburn, or the many health benefits of olive oil.

You credit a raw food lifestyle with keeping you slimmer and healthier. Why did you initially decide to go raw?

I used to suffer from chronic headaches, sinusitis and stomach problems. I also felt tired all of the time. A friend told me about eating raw and I quickly found that changing my eating habits not only improved my health, it also gave me back a quality of life I hadn’t experienced since I was a child. A raw food lifestyle is based on eating uncooked and unprocessed foods that are never cooked more than 116 degrees, which is believed to destroy enzymes that assist in digestion and the absorption of nutrients. I’ve been eating raw for the past two decades and it’s become a way of life for me.

What advice would you give to someone who was considering a raw food lifestyle?

People have a lot of misconceptions about what it means to go raw. They think it means just eating raw vegetables, but I also enjoy foods such as chocolate, ice cream and granola. It’s never been easier to go raw, and that’s why I wrote three books on the topic. My most recent book, “Easy Sexy Raw” (Random House, 2012), contains over 130 easy recipes as well as shopping and swapping lists.

What do you know about health and beauty at 53 that you wish you had known when you first started modeling at the age of 18?

Good health is not a luxury, it’s not something that is owed to us, but rather something we have to work to achieve. I regret eating the way I did when I was younger. I now know the food I eat has a direct impact on my health and how I feel, and that much of the food we eat today isn’t the same food we grew up eating. So much of today’s processed foods contain additives that have been linked to obesity and health problems, and there’s added hormones in meat and dairy. It’s important to read labels and really understand what you’re putting in your body.

What beauty product would you find it hard to live without?

I worked with Raw Essentials to help create their line of face and body products.  All of their ingredients are 100% raw so I feel good about putting them on my skin because they don’t contain any parabens, sulfates, detergents or toxic substances.

You’ve successfully reinvented yourself over the years, going from a model to actress to a successful book author with three raw food books and two fiction novels, and now talk show host. What’s next for you?

I never know what my next project will be. When I was younger, I used to be resentful of people who tried to put me in a box, and say things like, “Oh, you’re just a model.” I like taking risks and trying new things, and I was raised in a family that never put boundaries on me. My father encouraged me to apply for a military scholarship when I was in high school, and I not only applied, I was awarded the scholarship, but then had to decline it after signing on with my modeling agency.

Are there any non-profits that you believe in supporting?

Yes, there are several. I work with the Tony Alt Memorial Foundation, which was created in memory of my brother who died in 2005, and is run by my sister-in-law and several of my brother’s former co-workers. The foundation benefits children with cancer and other catastrophic diseases.

Forever 21 x Stand Up to Cancer

Singing and Living with an Invisible Illness: Cindy Ashton shares her Story