Winter is the perfect time to head to Times Square to take in the year’s best Broadway shows and luckily, we have the most delicious, posh restaurants within walking distance to your favorites. You don’t even need a ticket to enter!

One of BELLA’s all-time favorites, Mastro’s never disappoints. Known for its flavorful and juicy cuts of steak, magical menu, and high-end service, you’ll also love the waitstaff—they make sure you get in and out with time to spare before curtains. Create your own seafood tower as an appetizer loaded with your favorites, including lobster tail, shrimp cocktail, crab legs, oysters, and more. Finish the night with a playful cocktail and some warm butter cake, and you’ll be ready to brave the crowds of Times Square!

Pair it with: “The Book of Mormon”

Nikkei cuisine is a combination of Peruvian and Japanese flavors and dishes that dates back to the 1800s. The opening of Sen Sakana makes us wonder why there haven’t been any Nikkei restaurants in Manhattan sooner. Nothing we tried here was a disappointment, and trust us, we tried a lot. Most dishes are small plates meant to be shared, and each bite had us intrigued to try the next. Fill up on an assortment of hot and cold small plates, and save room for sushi. The flavors are different than you’d expect, but are wonderful all the same. Don’t miss the Mochi Empanadas for dessert—they’re the best we’ve ever had!

MOCHI EMPANADA: House made Mochi filled with ice cream of your choice

Pair it with: “Dear Evan Hansen” 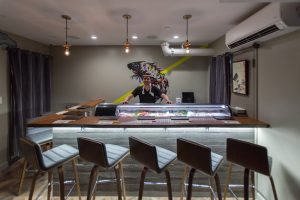 This small, unassuming underground lair is the perfect stop before heading to a show. Graffiti-splattered steps lead you down into the eight-seat omakase restaurant helmed by David Bouhadana, where diners need not look at a menu. Twelve pieces of the freshest sushi you will ever have set you back only $50, hand-prepared right in front of you. The Wagyu-uni, referred to as “millenial surf and turf,” is probably the menu’s highlight. But here’s the catch: you only have 30 minutes to eat. Once your omakase tasting menu begins, Bou starts the timer, making sure he can get customers in and out in a timely fashion. But you can always squeeze next to the bar and down a cocktail or two if you’re not ready to leave quite yet.

Pair it with: “Hamilton”

If you want to get down ‘n dirty before a show, this Southern locale is the spot to hit. Known for its Nashville-style grub, it’s safe to say that dinner here may get messy. From the tacos and fried chicken to the barbecued pulled pork, everything here is finger-lickin’ good. Start with some apps if you’re really feeling hungry, but whatever you do, don’t miss the cornbread. After you’ve completely satiated your appetite, you can head downstairs to work off some of those calories playing games like pool, corn hole, darts, and even beer pong!

Pair it with: “War Paint”

Written By
Amanda Mactas
More from Amanda Mactas
Winter is the perfect time to head to Times Square to take...
Read More