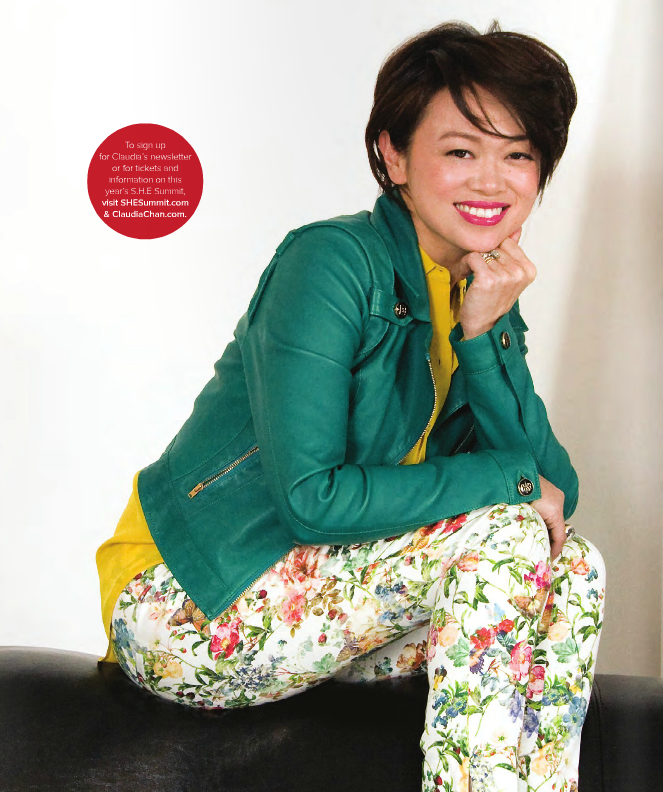 Smart, intuitive, passionate and determined are just a few words that immediately come to mind when hearing the name Claudia Chan. In essence, Chan is a champion for others, particularly women, and is on a mission to unite and join together the powerful voices and leaders of today. Her goal: to empower other women so that they too can reach their full potential while igniting the flame inside all of us to dream and do big.

Growing up in NYC as the daughter of immigrant parents, Chan and her older brother watched their parents build their family business, which instilled in her a sense of hard work and determination. The seeds for success were planted early on; Chan knew she one day wanted to own her own business.

While working at a start-up tech firm shortly out of college, Chan began noticing the endless amounts of Internet events popping up and decided to take advantage of this new trend. In 2002 she started iLounge, an event and party planning firm. With the dot.com bubble becoming unpredictable and her business gaining traction, Chan left her full-time job to focus solely on iLounge. Two short years later, after meeting the founder of Shecky’s, a wildly popular and well-known women’s entertainment company, Chan merged her growing business. For the next nine years, she held the role of president and chief discovery officer.

A young entrepreneur at the age of 24, Chan was on her way to achieving the goals she set early on. It wasn’t until her early 30s, when she had already attained a high level of success, that Chan started asking herself some really tough questions. She wondered if she was on the right path.

“As I became a more successful women entrepreneur, I started paying attention to women’s empowerment,” says Chan, becoming what she describes as “slightly obsessed.” She read as many books as she could and examined non-profit organizations and movements geared toward women, she recalls. It was then that she had an “a-ha!” moment.

“I wanted to get other women to care about women’s empowerment … to inspire and empower them to become leaders so they in turn could empower the world,” Chan says. The big question: “How do we do all these things?”

Sensing the need for women to be able to relate to one another, Chan knew conversations had to be started about the incredible things they were doing. She took a leap of faith and began creating a new kind of media, one that would provide inspiration, education and networking to women so they could lead more optimal personal and professional lives.

In March 2012, Chan launched SHE (She Helps Empower) Global Media Inc., which encompassed all of her initiatives, ClaudiaChan.com and S.H.E Summit. Chan’s work gives women a voice to which they can relate. Whether it’s the work/life balance so many strive to achieve, raising a child or starting a business, women try to do and have it all, which is why

This year, Chan’s S.H.E. Summit, which she refers to as “a transformational event for women,” will take place on June 5-6 at the 92nd Street Y. The two-day conference will open its doors to 2,000 women, and will feature more than 60 extraordinary role models, thought leaders and companies passionate about empowering women. In addition, there will be hundreds of local #SHESummit meet-ups with women creating their own events. “It’s a weeklong celebration of the aspirations and achievements of women,” says Chan.

By this summer, Chan plans to launch S.H.E. University, a catalog of online classes available for download that will delve into topics pertaining to health, wellness and development skills – tools women need to become more successful.

Though there will always be obstacles to climb and hurdles to overcome, says Chan, it’s all part of the journey. “It’s not about reaching the top that is important, but the lessons you learn along the way,” she encourages. “We benefit from the hard stuff because it’s what makes us smarter.”

Chan lives her life by such mantras, and takes time out for the things that make her happy:  spending time with her husband, doing yoga, meditating or writing. Her passion projects are what keep her balanced and focused, she says.

With all that Chan has created thus far, she is truly on a mission to leave a global impact on women. Her future goals include writing a book and continuing to create positive conversations with a heavy focus on the “internal revolution” happening inside women’s minds.

Living a purposeful life and giving back are what’s important for Chan. “We are given gifts and abilities, and being able to contribute is what keeps me climbing the summit!”

For tickets and the most up-to-date information on this year’s S.H.E Summit, visit SHESummit.ClaudiaChan.com. To sign up for Claudia’s emails and newsletter, or to download the free guide for #SHESummit Week, visit ClaudiaChan.com.

Read Claudia Chan’s 10 mantra’s for optimal leadership and lifestyle, exclusively on BellaNYC.com below: 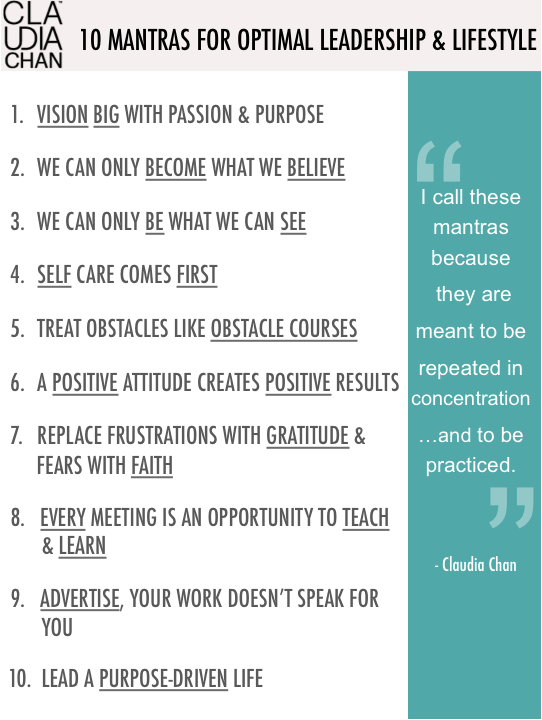