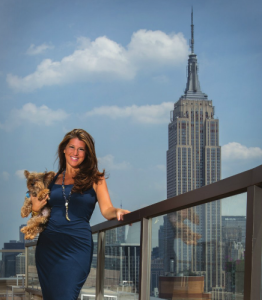 Passionate, energetic and full of life, Heidi Krupp, CEO and founder of Krupp Kommunications (K2), a New York City-based public relations, marketing and branding agency, has been making her mark on the PR world for quite some time. When talking with Krupp, it’s easy to see why the girl from Pittsburgh, PA, who grew up wanting to be Barbara Walters has achieved as much as she has; she’s humble and grateful for the opportunities that have been bestowed upon her.

After graduating from Ohio University, Krupp made the move to New Jersey and eventually joined the PR department at ABC’s “20/20” as a production secretary. New to the business, Krupp recalls the time the Barbara Walters plopped a manuscript on her desk. “Not thinking I should be handing this to my boss, I did what she asked – took it home, read it and came up with a PR plan,” says Krupp. The manuscript just happened to be Walters’ first ever “12 Most Fascinating People” show, which went on to became a huge success. Krupp received her first PR credit for that show and was instantly hooked.

While attending the wedding of “20/20” journalist and co-worker Catherine Crier, Krupp met legendary literary agent Jan Miller who Krupp describes as her “fairy godmother.” Miller asked Krupp to come work for her, but Krupp politely turned down the offer.

Fast forward a year later and Krupp did make the decision to leave “20/20,” taking a position at Ruder Finn, a public relations firm, while the thought of starting her own business was in the back of her mind. She reconnected with Miller who, she says, “basically told me I was going to work on my own, it was real simple, and that she would give me the steps to do it so come over to her apartment.”

In that apartment meeting, Miller handed Krupp a piece of paper with all the people she planned to introduce her to, a list she has to this day. Miller told her she needed $5,000 to get started, so when a woman at a shop in Hoboken (where she was living at the time) admired Krupp’s car, she immediately said, “It’s for sale – $5,000 cash.”

Money in hand, Krupp was ready to get started. Miller began introducing her to people such as Jake Steinfeld (“Body by Jake”), author David L. Bach, Tony Robbins, as well as a slew of others. She worked from her apartment for the first four months, then made her next big jump by taking both her business and her life to NYC. “It made sense from a logistics standpoint to be in Manhattan, and sometimes you have to do things that are out of your comfort zone to move forward.”

Never doubting she’d succeed and feeling a certain sense of responsibility to do right by her friend and mentor, Krupp kept hitting it out of the ballpark with the people Miller had introduced her to. “She kept helping me out yet never asked for anything in return. She’s been a supporter and sounding board for me on many levels.”

To date, Krupp and her team have worked on the launch of 75 bestsellers, including “The South Beach Diet” and “Chicken Soup for the Soul.” In fact, when she was hired to work on the 20th anniversary edition of the popular compilation, Krupp was not only tasked with helping find 20 new stories and thought leaders, but also writing the foreword! Excited to be a part of it all, Krupp says seeing her name on the cover was an honor and one of those “pinch me” moments.

When talking about moments of clarity, Krupp steps back to take a look at her life, and all that she’s built, her business and her family, which includes her husband Darren, son Caden, and a 13-year-old Yorkie named Isaac. Home for the family is in Chelsea; a neighborhood she raves about. Her apartment features floor-to-ceiling windows with amazing views of the city from every room, an instant selling point when the couple first stepped inside.

Krupp describes coming home as “calm chaos” – the calm is the peacefulness she feels when walking into the urban Zen surroundings with the chaos of NYC right outside. Her favorite room, she says, is her son’s. It boasts a view of the Empire State building right from his window.   With stunning views all around, the couple didn’t have to worry much about decorating; NYC serves as their artwork and backdrop.

What she loves most about NYC? “The energy, diversity, people and the convenience,” she explains. “I’m also grateful for the opportunities it offers mothers and working women who strive to have it all – something I believe is possible!”