It was a “Golden” finish when Mario Gotze, aka Super Mario, scored the winning shot that gave Germany the World Cup Trophy. Just a couple weeks ago Gotze was seen getting his head into the game on his Instagram (@gotzemario), when he sported a pair of orange beats. Thanks to Dr. Dre and British bombshell Naomi Campbell: not only will Gotze get upgraded with 24 Karat Gold Beats Pro Headphones… but the entire German team and Manager will receive a pair. That’s 24 pairs of 24 Karat Gold Beats Pro Headphones! 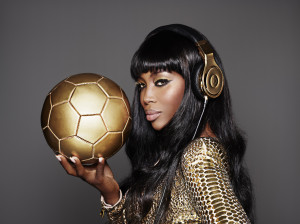 Beats has memorialized the World Cup win with an elite team with the most savvy You Tube Ad follow up campaign, from “The Game Before The Game” to the now properly coined “Golden”. Legendary British portrait and fashion photographer Rankin was commissioned by Beats, to capture a celebratory salute starring the Gold Beats Pro Headphones and Naomi Campbell. The statuesque Super Model channels the essence of the World Cup Gold Trophy, as she sports a gold scaled Tom Ford dress, gold-netted Christian Louboutin high heels, Gold eyelashes and the Gold Beats Pro Headphones. The only thing sweeter than that, is the kiss Naomi gives the gold soccer ball before tossing it to the camera… we love the playful and energetic Naomi for making good sportsmanship so fashionable and  Germany’s World Cup Gold Win a beautiful celebration. 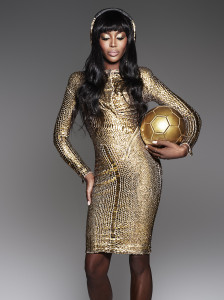 “Working on the ‘Golden’ project with Beats by Dr. Dre was so much fun. The shoot was loudand energetic…I even got to practice my football skills! This was the first time I’ve had thechance to work with the legendary Rankin, so it was a dream shoot. The ‘Golden’ project is theperfect way to celebrate the German victory and I’m glad to be a part of this campaign.”-Naomi Campbell

Beats Pro are designed to deliver the power and emotion artist originally intended, making it the perfect gift symbolic of a World Cup Victory and Gold Trophy. Naomi Campbell wore Gold Beats Pro Headphones listening to a playlist of Bob Marley’s “Is This Love?”, Queen’s “We Are The Champions” and Eminem’s “Lose Yourself”: to get into the groove while filming “Golden”. And although music allows you to lose yourself in the moment: this is an unexpected epic win for the Germans… that has everyone savoring the moment. The Germans World Cup Victory is one they will never forget, as they literally sport Gold Beats Pro Headphones. I wonder what playlist will inspire the Germans next victory. No matter their choice, it will be one sweet sound from the Gold Beats Pro Headphones!

Beats continues to be the gold standard with Beats, Beats Audio and Beats Music.  And although the Gold Beats Pro has been custom designed and dipped in 24K Gold for the victorious German team: Beats has something for every champion. Whether you choose to go “Solo”, “Wireless”, “Executive” or “Pro”…Beats is the best way to make your playlist and dreams heard.

So get into the game with Beats and tweet me @BostonScarlette what playlist inspires your dream victory! Mine is listening to Irene Cara’s “What A Feeling” remade by JLo, Destiny’s Child’s “Survivor” and even some Beastie Boys or Run DMC: that’s how I listen to my dreams with Beats. If you need a little inspiration, check out the behind the scenes footage of Naomi Campbell in Beats “Golden” Campaign.

Written By
BELLA Magazine
More from BELLA Magazine
On our latest episode of #RealTalkWithBELLA  our EIC, Vanessa Coppes, is joined...
Read More