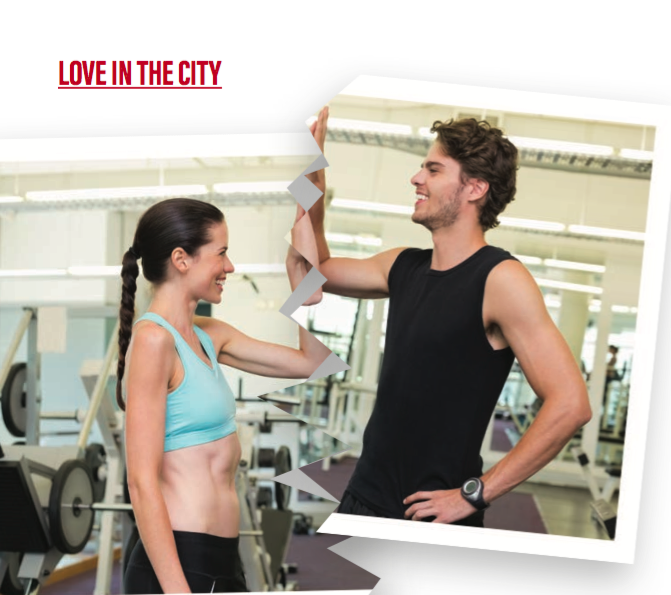 “What if you’re pushing for the trainer with the best resume while he’s more focused on the one wearing painted-on yoga pants? Someone is going to say the wrong thing… guaranteed.”

Should couples hit the gym together? In a word, no.

Don’t get me wrong – I’m all for fitness and getting out to do things together. But bed buddies as
gym buddies? Eh, not so much. I get that it might seem like a no-brainer. You already share so much. What could possibly go wrong by “battling your bulge” as a team? Actually, more than you think.

THE GOOD: Hey, it’s always fun trying out new gyms. Who doesn’t love the flirty back-and-forth that comes with scoping out a new fitness locale? “Oh, look! They have covered bicycle parking.” “But this one offers a Socratic, trilingual day care.” It’s a full-on party as you’re toured through luxe facilities full of shiny equipment and endless samples of whatever fair-trade, organic, gluten-free juice is on tap. And don’t forget, couples usually score a better deal than a mere single.

THE BAD: But what happens when you can’t agree? He’s gone and fixated on some rugged, old-school gym while you would prefer something that doesn’t look (or smell) like the basement of a decaying crack house.

He’s all “theme music from Rocky” in his head while you have a panic attack trying to remember if your vaccinations are up to date.

THE UGLY: Somehow you find a compromise that works. Unfortunately, six weeks later you have a massive fight and break up. Thanks to the super deal you negotiated – that came with a contract more binding than a prenup – you are now tied to your ex like a resistance band that won’t ever, ever break. #KillMeNow

THE GOOD: Having a trainer can simplify even the most complicated fitness goals – and training as a pair means you will pay even less per person to do so. That’s great! Hiring a professional to guide you through the world of fitness puts you both on the fast track to success.

THE BAD: What happens when the arguments over whom to hire suddenly turn personal? What if you’re pushing for the trainer with the best resume while he’s more focused on the one wearing painted-on yoga pants? Someone is going to say the wrong thing… guaranteed.

THE UGLY: And yet, bad as that may be, it’s nothing compared to the hell a guy enters after realizing
that he is flexing his own insect-sized biceps under the watchful eye of some superhero-bodied Joe Manganiello look-alike more focused on sliding his hands (or self) up and down your partner in pursuit of “proper form.”

ACTUALLY WORKING OUT TOGETHER

THE GOOD: Having a partner makes hitting the gym way easier. It’s nice to have someone help with the motivation part of working out, and if they happen
to already live with you, all the better. Plus, you have a spotter and at least another set of eyes to decipher how to use that bizarre-looking device in the corner with all the levers and an upside-down seat. What the heck is that thing?

THE BAD: Sadly, the reality of mixing your “motivator” with your home life means you either become the annoying one always harping about getting to the gym or the hassled one who begins to fantasize about smothering the annoying one with a pillow if the words “spin” and “class” are mentioned one more time.

THE UGLY: Worse? Hell, yes. Remember that weird face he makes when you … er… get together? Well, it seems that honey-bun busts out that same freaky look whenever he lifts anything over 30 pounds. That means what you have learned to close your eyes to now plays on a loop in front of you. And for multiple – interminable – reps and circuits. Lucky, lucky you.

PLAYING A SPORT TOGETHER

THE GOOD: Joining a team is a great idea. You get tons of exercise and have fun doing it together. Plus you get to meet new people. Playing sports is a genuinely great way for couples to bond, as the spirit of competition mixed with group camaraderie can’t help but bring out the best in people…

THE BAD: …until you eventually realize how much it bothers you that your sweetheart dribbles the basketball with two hands, staring straight down. Or that he throws a baseball like it’s a Frisbee. Or that she swings a tennis racquet like a fly swatter. Respect can be a fragile commodity on the sports field.

THE UGLY: But what happens if the opposite is true? What if she’s actually really good? So good, in fact, that her talent also

includes a temper to rival Serena Williams’ when things go wrong. One missed shot leads to an expletive-laden, chair-throwing rampage that pretty much guarantees awkward stares or hostile silence during the first (and last) post-game beer hoist.

THE GOOD: As a strength and conditioning program that mixes intense aerobic exercise, body-weight strength movements, and Olympic-style weightlifting, what’s not to love? It seems to hit all the areas of concern while allowing couples to plan workout routines that complement their individual skills and shared abilities…

THE BAD: …until you take it too far and end up looking like those plastic, over-bu ed Barbie and Hulk-like Ken sets that seem to dominate the televised coverage of the sport. Could anything be worse than planning your entire life around CrossFit competitions, spray tans, and endless selfies?

THE UGLY: That you both truly believe you actually succeeded in becoming plastic, over-buffed Barbie and Hulk-like Ken CrossFitters when you so very clearly did not. Failure can always be survived, but clueless delusion lasts a lifetime.