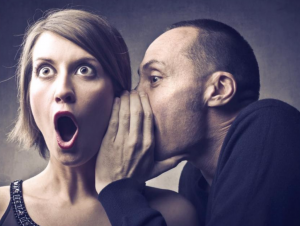 In general, men are no more truth-challenged than women. Still, it is fairly rare that the spotlight ever swings to highlight my gender’s more egregious examples of falsehood (beyond the hacky standard, “No, dear, of course you don’t look fat in those pants.”) Truth, as always, is the goal, and showcasing some of my side’s more common deceptions is a public service of sorts—a genuine attempt at better relations between the sexes. At least, that’s the particular lie I’ll be going with in this issue.

This is the kind of lie even he wishes he truly believed. Trust me, all guys care deeply about your “past” and should be reminded of it as seldom as humanly possible. Maybe it goes back to Stone Age thinking or some Neanderthal rule regarding whom you share a cave with, but guys will always choose to live in a fictional world where the only man you’ve ever kissed is him. And he’d prefer that no other amorous affairs be spoken of again. Foolish head-in-sand thinking? For sure, but make the mistake of mentioning lovers past and you can expect big problems in an otherwise solid relationship.

Clearly, this is a ridiculous statement. Pornography simply would not exist unless what a guy saw mattered to him. The reason is simple: Guys are visual creatures. Folks can try to pretend that men and women are exactly the same, but they’re not. Guys respond to what they see, which is why his head is on a swivel as soon as you hit a beach or visit a gym jammed full of your tight-clothed sisters. It’s not an accident women have mastered the dark arts of fashion and makeup. So beware the siren song of sweatpants and ponytails. He’s watching closer than you think.

This one’s a real whopper. Now, I’m not saying guys automatically disrespect women who sleep with them, but there is a definite correlation between the level of respect provided and the length of time it takes to get an official bedroom invitation. And don’t let your progressive pals convince you “times have changed.” No way, no how. Guys in the 1950s used the very same word dudes in the new millennium do when it comes to women who are too friendly too soon, and you know what it is. Is that equality? Of course not, but the truth remains no woman ever wants to hear her name and the word “easy” used in the same sentence. Make him wait. Your power only increases when you do.

To be fair, this one can actually become true, but only after a significant amount of time spent together (and I’m talking years). The reality is that, for the most part, your man doesn’t think about your parents at all. And when he does think about them, it’s not because he thinks they’re wonderful or he’s excited to hang out with them—it’s only to make you happy. He’s into you, not your mom or dad. In fact, if a guy is all about your folks early on, it’s a good sign he’s looking to get something from them vs. you, and that’s legit grounds for dismissal.

As far as lies born from sincere, heartsick desperation, this is easily the cream of the crop. The dude has been into you forever, but you simply refuse to notice. Convinced his only hope is for you to spend more time with him, he allows the nonsensical phrase “Let’s just be friends” to escape his mouth. Look, this is a ploy—and a bad one at that—but you play along so you can have a backup guy around. I get that you need an ego boost when the guy you are into messes with you, or you need someone to help you move for the eighth time, but allowing this to happen is just cruel.

As a statement it may be true, but when said by a guy it’s a strategic pose and nothing more. It is designed solely to put you off guard. No guy actually thinks you’re smarter than he is. Sure, he’ll say it over and over, and even offer examples of times you were right and smart and he was dumb and wrong, but in his head he does not for one second think he is really the less intelligent party. Guys know women like compliments, so we toss them out left and right to keep you from getting in our face about stuff. And that’s not all bad. The only danger comes from you believing he means it because that proves you’ve become delusional, which means he’s won. Don’t fall for it.

In most cases, this falls in the same category as “let’s be friends.” It’s yet another sad (and fairly predictable) way for frighteningly insecure guys to maintain proximity to the women they want to impress. In the abstract, most guys aren’t actually true feminists, ever. Or even could be. He can shout his support from the rooftops and march around in as many parades as he can find, but it’s just a pose so you’ll like him better. Want proof? See how feminist a guy is when he’s in a locker room surrounded by other guys. His sisterhood street cred will evaporate like snow in the sun.

How any woman could ever believe this is beyond me. Rick Springfield, The Cars, and all manner of music and movies have ably chronicled the soul-crushing pain guys endure at seeing a girl they are “friends” with suddenly become the lover of their best buddy. This cannot be said enough: If a guy is hanging around with you, he wants to be with you and wants you to be with him! He is not happy to see you and his buddy dating, ever. At all times, he is absolutely imagining the two of you together way more than is healthy. Protect your sanity—and his—by not even asking him to lie about this.

This is such a huge lie. I’m not talking tipsy—this is about you being messy drunk (more than once) and your man trying to make light of the fact that you’ve become a hideous embarrassment to him. Look, guys always expect women to be more mature. That’s why we look up to you more often than not. If a gal is getting smashed all the time, what guy is enjoying it? What he’s really doing is making secret plans to bolt.

Fair? Not by a long shot, but no one said the nasty business of boys and girls getting together was ever gonna be fair. I mean, how could it? You’re way smarter than we are, right?

Enhance Your Water Intake with These Fun Alternatives

Inclusivity In The Fashion Industry: Designer, Dara Senders, Is Paving The Way