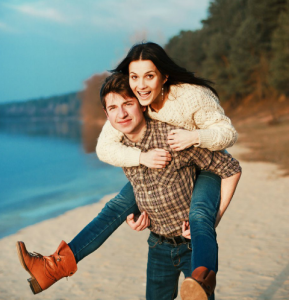 “How can I tell he’s not that into me?” You ask your friends, check your star charts and maybe even try some pathetic magazine lists (Hey, wait a minute …) desperate for a clue, any clue at all. You need help but instead you get hack-y advice like “dump him if he buys you bad gifts” or “if he just won’t talk, move on.”

Look, most guys hate gabbing, bury their emotions deeper than dead relatives and can’t buy a thoughtful present to save their lives. That’s no reason to kick ‘em to the curb. These are reasons to dump them. For your own sake, match at least three and then get yourself gone, girl. Fast!

Well, that was easy … finally, after months of back and forth, you got the courage to show that soul-sucking lump the door. Nice work! He was only dragging you down, girl. But what about the party on Friday? And that couples hike for next month? Don’t worry.

Thanks to RENT-A-GENT, you don’t have to invent some lie and miss out on all the fun. RENT-A-GENT lets you pick exactly the right man for exactly the right event. Want looks, get looks. Want brains, get brains. Both? No problem. You can even select his wardrobe! Let Mr. Right take all the time he needs getting his act together.

Find out more at RentAGent.com.

Love Is In The Air with Nonie & Outland Denim

You Need to Try Kassi Club, and Here’s Why…