If you’re following the mother/daughter duo behind the Instagram sensation Crazy Jewish Mom then you’re treated on a daily basis to an array of hilarious posts that will leave you laughing and often times uttering the phrase, OMG! If you’re not, then you should be! With more than 800,000 followers, fans of the account are given an inside look at what Brooklynite Kate Siegel deals with when it comes to topics such as dating, pro-creating, her current residence, which her mom refers to as the, “death trap apartment”, her boyfriend (current nickname, SuperJew) and a menagerie of other things mom Kim Friedman touches upon in her daily text messages.

In her book, “Mother, Can You NOT?” Siegel gives her followers an in-depth look into not only the things her mother says, but the context behind the crazy stories and adventures. It’s an extension of the snippets posted daily and a chance to understand the hilarious exchanges that are Siegel’s “norm.”

No subject is off limits for Friedman who makes it abundantly clear she’s not-so-patiently waiting for grandchildren, or as she likes to affectionately refer to them as “Grandspawn.” Often addressing Siegel in her messages as “Spawn,” one might wonder how these two really get along. In a word, fabulous!

BELLA New York had the chance to sit down and chat with the duo taking social media by storm. Sit back and be prepared to laugh….

Each of your IG posts is funnier than the last. With multiple messages from your mom throughout the day how do you decide which ones you’re going to put up?

Kate Siegal: Multiple? Hundreds! It’s easy. I’m lucky my mom is very funny, so there is never really a shortage of material. Over time I’ve gotten a sense of what will play better with my followers. At the end of the day I want them to have a good time so I share what I think they will enjoy most.

On an average day how many messages would you say your mom sends you? Are there days you don’t hear from her at all?

KS: I actually counted an average day recently because someone asked me that and she clocked in at 111 in 24 hours! I always hear from her and if I didn’t one day, I’d worry and call her.

When did you start the IG account and did you think it would be received in the way it has?

KS: November of 2014 and I had no idea! It started out as a fun little project for me so the response has been overwhelming and wonderful. I’m lucky to have her as a mom and it’s fantastic that so many people now get to share in that and see the humor and love firsthand. 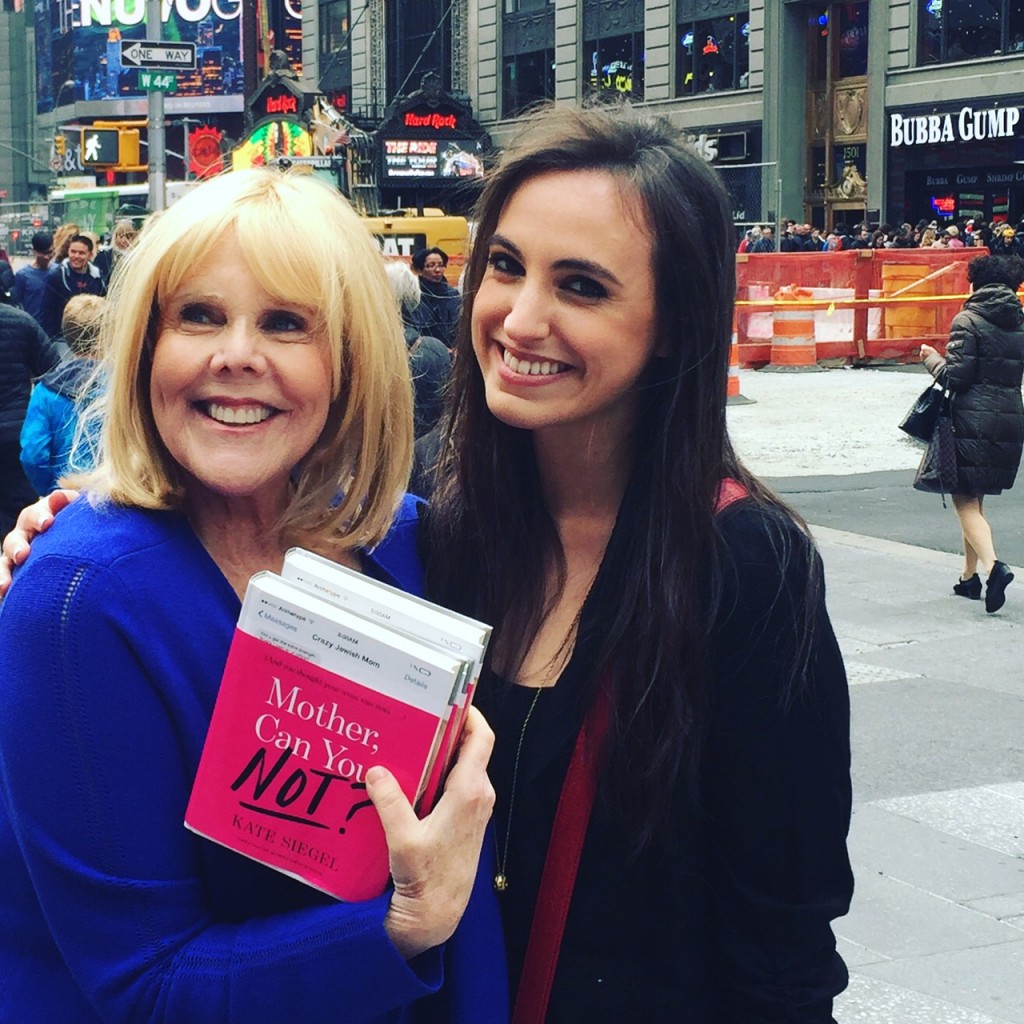 What was your first reaction when Kate told you she planned to share your text messages on social media?

Kim Friedman: By social media I thought she meant Facebook friends, etc. I had no idea that 800,000 strangers would know everything I texted her.

Are you surprised at the popularity this has garnered?

KF: Definitely! But I think I give her great advice and if other people can learn from it, so be it.

Were you surprised by the traction “Crazy Jewish Mom” has gotten in such a short amount of time?

KS: Yes, very much so. It all really kicked off when Morgan Shannahan from BuzzFeed wrote a post about us. At that point the account had around 12k followers, but when the article went live the following exploded. The post was trending at the number one spot on BuzzFeed for several days and from there other media outlets wanted to interview us and share our story. We went from 12k followers to 200k overnight. It was crazy!

What led you to take things a step further and write a book?

KS: I’ve always written so it’s a dream come true for me to be a published author. I also really wanted to share more with our followers. On Instagram, you only see a tiny part of our relationship so the book was a fantastic opportunity to share some of the INSANE adventures we’ve gotten into over the years! Plus, I think there’s this misconception that my mother is this backwards, old-fashioned woman, when in fact she is a raging feminist. I think the book provides some much needed context for the posts and some insight into her sense of humor. And her feminism really comes through in the book, which was something that was very important for me when I was writing it.

How did you feel when Kate said she was taking things a step further and writing this book?

KF: Well not to brag, but she is a terrific, funny writer…so I was excited. However, I had no idea about what she was going to write about. I will probably lose some friends now that the book is published. In fact, I hope I don’t get arrested.

Your mom is overly concerned with everything from your health, to your relationships, to where you live – has there ever been a point where her strong opinions on these topics gets to you?

KS: Of course! She nags, she’s my mom, so sometimes it gets annoying. That said, I have never for a moment in my life doubted that it comes from a place of love. And over the years I’ve had to acknowledge that she is usually right about the things she really pushes for.

Your daughter takes your messages and advice in great strides as she knows they’re coming from a place of love – but if she told you to pull back on something, say her dating life, could you do that?

KF: I’m respectful of her of her actual boundaries but I will always say what I think…in fact, I think I say what a lot of moms think but don’t say to their daughters. Kate and I have a very open relationship and not telling her something I think is important would be the same as lying.

You’ve done some things in the name of love for your daughter, like signing her up for a dating website which might sound a bit crazy – would you agree with that sentiment and is there a particular thing you’ve done that you’d say was a bit out there?

KF: Actually I don’t think any of my drone mom stuff is crazy. Maybe when I encouraged her to wear a SuperGirl costume when she ran for student council was probably potential seventh grade social suicide….but she did win the election!

How does your boyfriend handle his nickname (SuperJew) and the fact that your mom still tries to find you a husband?

KS: He’s a really good sport; they actually have a great relationship. He thinks she’s very funny. And again, this is where I think the book provides context. My mom is a hilarious, sarcastic woman, so a lot of what she says is tongue in cheek – and you can’t really get that sense of tone in her texts. But Jon always says, “Hey, she says what a lot of moms think, but don’t actually say out loud.”

What would you say to the people out there who take offense to some of the advice/things you say to Kate?

KF: The proof is in the pudding. My daughter and I love each other and have a great relationship. She is a Princeton graduate and just became a New York Times best-selling author at age 27. Plus, she has over 800,000 followers on Instagram. I must be doing something right. Also, get a sense of humor!

There are people who don’t agree with some of the ways in which your mom thinks – like procreation, or how to find a man- what would you say to those who disagree?

KS: I love her and think she’s a wonderful, hilarious woman. And I would hope that they would base their understanding on ‘what my mom thinks’ on more than just a few snippets of conversation posted on IG. That said, if after reading my book and/or talking to her, you still think she’s an unfunny asshole, I’d say ‘it’s a free country!” You’re free to agree or disagree with whoever you like!

Best advice your mom’s given you?

In reading the book your dad seems pretty quiet – are there times when he jumps in with some words of wisdom of his own?

KS: He is just the most calm, stable man on the planet. The yin to my mother’s yang! He’s given a ton of wonderful advice over the years.

What do you envision next for Crazy Jewish Mom?

KS: We’re exploring a bunch of different exciting opportunities but I am extremely excited aboiut a couple of things we have coming up. We’re going to be doing Q&A’s and advice in the form of a column on my website and podcast!

What would you like to see next for Kate and the brand?

KF: I want her to have a great career, invent an app, grow her business, and write more books; then TV and movies. And of course give me GRANDSPAWN. Be like Sheryl Sandberg; lean in and have it all!

Written By
BELLA Magazine
More from BELLA Magazine
The Fourth of July celebrates our independence, and at Bella we love...
Read More