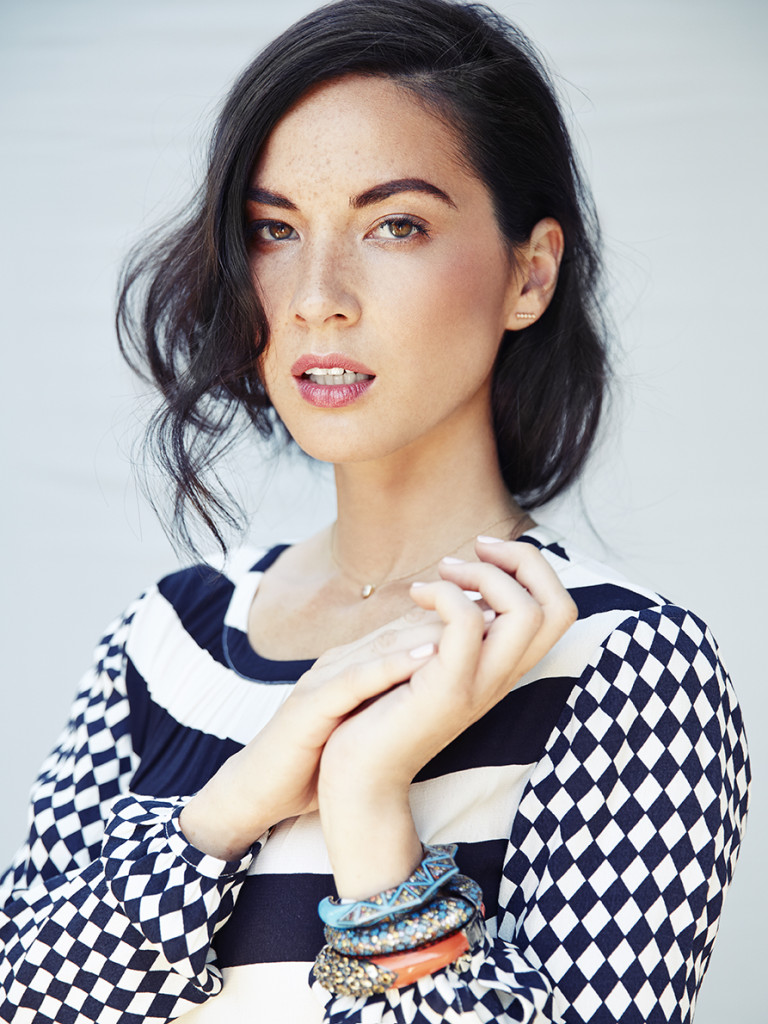 Armed with a fierce determination to make it as an actor, it’s clear when watching Olivia Munn that she’s achieving the goal she set for herself as a young girl. She’s a star who knows what she wants and has worked hard to get where she is today. Beautiful, talented, funny, and extremely down to earth, Munn is holding her own against some of the biggest talents in Hollywood while making a name for herself in the process.

Born in Oklahoma, the actress spent a portion of her childhood living overseas in Japan on a military base where her ex-stepfather was stationed in the United States Air Force. “It’s always hard being the new kid,” says Munn, but adds it was her positive attitude that helped her adjust. 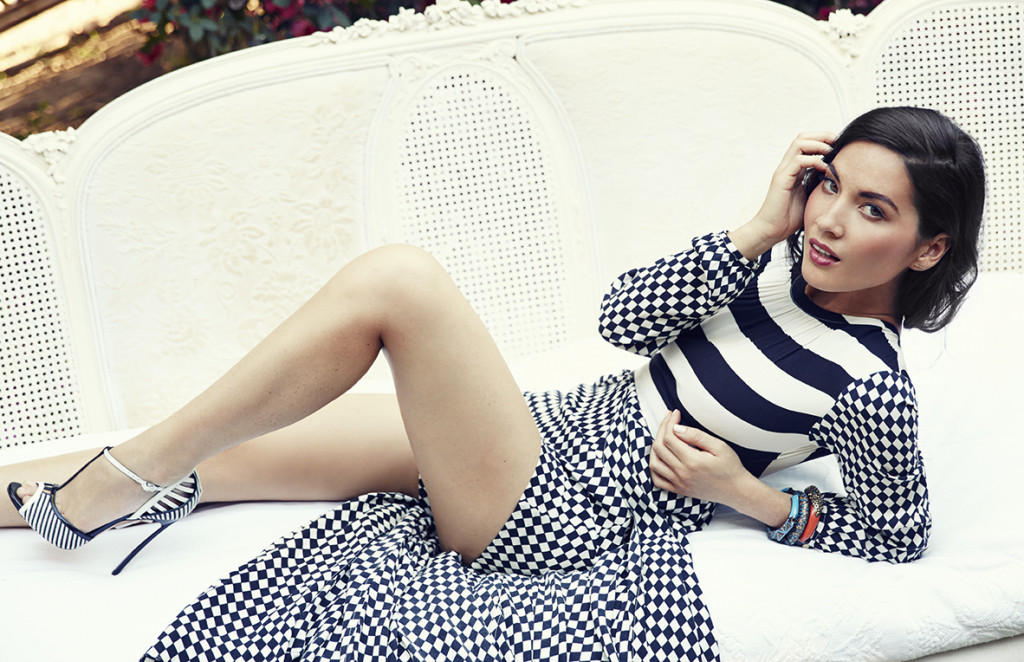 Moving back to Oklahoma proved to be a bit harder. At 16 years old, the age factor surmounted the cultural transition. “At that stage, social clicks were already formed,” says Munn.  She recalls her first month of school as a horrible time and begged her mother to either allow her to home school or transfer elsewhere; neither were an option. 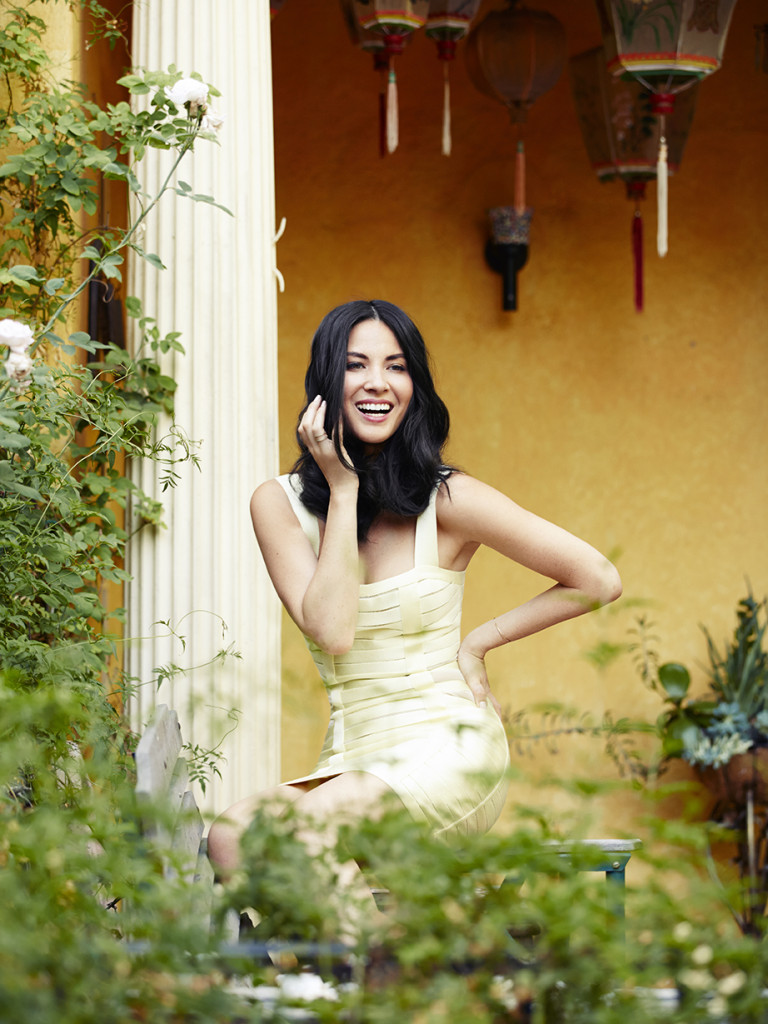 “I felt invisible and lonely, it was hard,” she recalls. To make things a little less lonely, Munn’s sister would make the half-hour drive from college every day to sit and have lunch with her so she wasn’t eating alone. Despite those difficult times, she believes the experiences helped build character. “They gave me a strong sense of self-worth and the tough skin to weather the rejection that comes along with this business.” Encountering many struggles helped shape the person she is today, she says. 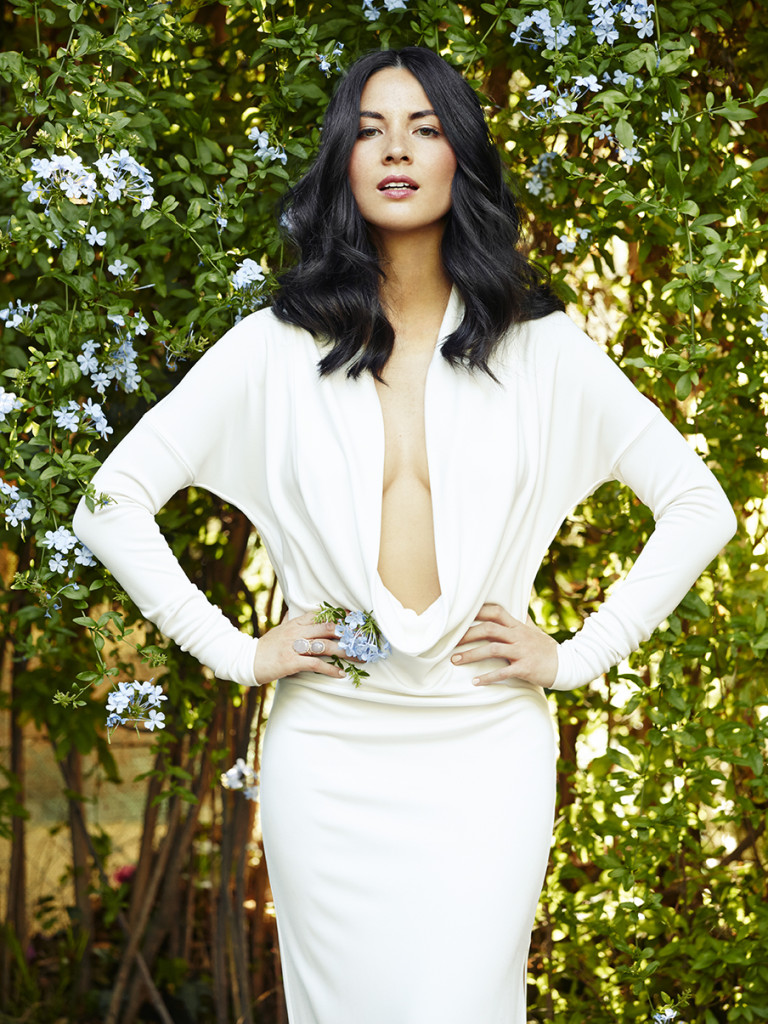 A first generation American, Munn’s mother is of Chinese descent although she was born and raised in Vietnam. When the Vietnam War ended in 1975, she fled to Oklahoma with her family, which included nine siblings. While Munn always knew she wanted to be an actor, it wasn’t something that was encouraged nor taken too seriously at home. “My family is involved in academics, so it was just assumed I would be too.” Her strong desire to move to Los Angeles after high school graduation was derailed, as her mother had other plans: She wanted her daughter to attend college. Munn agreed to go to school and use her degree for one year. She graduated from the University of Oklahoma with a degree in journalism. Little did she know then how art would imitate life… she put that degree to use, just not in the way her mother had envisioned. 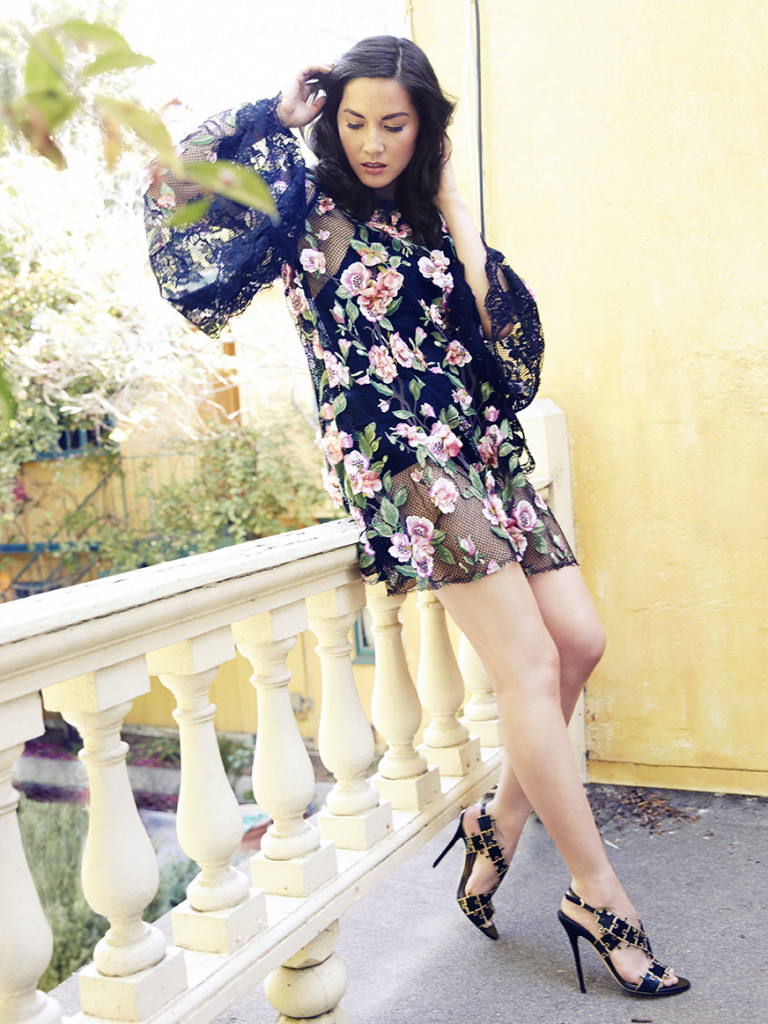 True to her promise, Munn went to work for a local NBC news affiliate in Tulsa, Oklahoma, but describes the experience as the worst she’s ever had. Not only were her co-workers mean, she recalls, they were downright cruel.  “I purposely worked Friday through Sunday, from early morning to night just to avoid them,” she says.  It wasn’t until that promised year was up that the same people who treated her terribly changed their tune, all curious as to where she was headed. 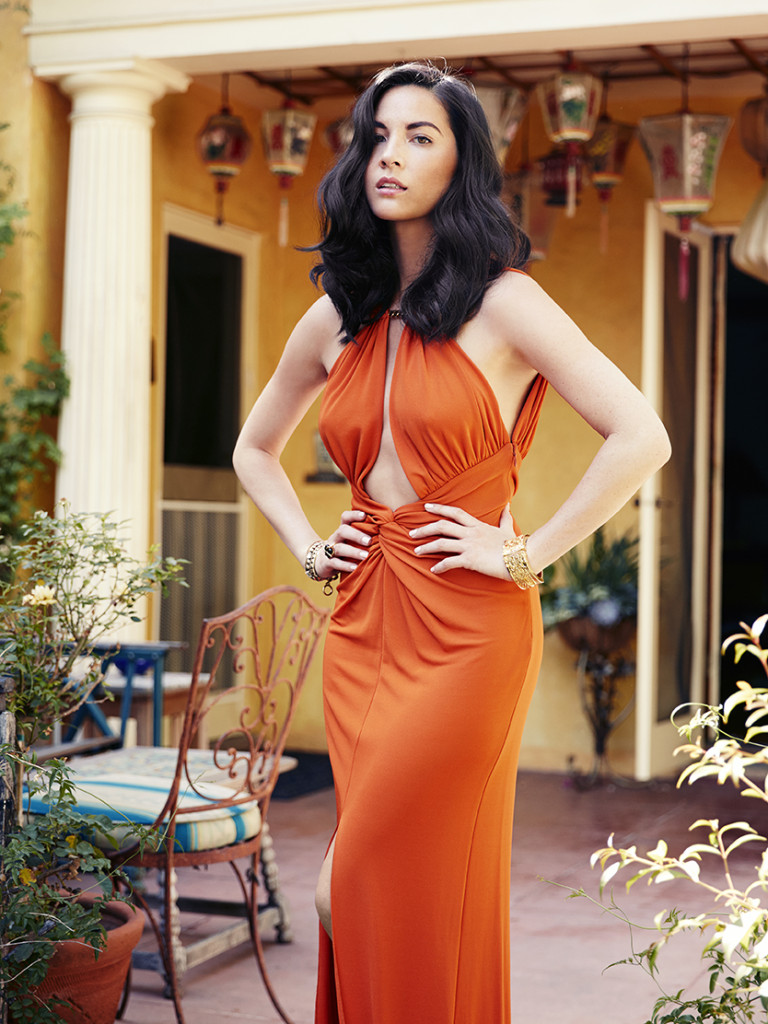 “Dare to dream and reach for the stars, and those who don’t dream high sometimes try to take you down.” It’s up to you to get back up and move on, she says.

In 2004 Munn finally headed out to LA to pursue her dream. Armed with a book about the business given to her by a friend, she set out in acquiring a print and then commercial agent. Not knowing anyone when she first arrived, the soon-to-be star quickly began meeting different people, focused on studying her craft [with well-known acting coach Sandy Marshall] and pounded the pavement on auditions. What she says she didn’t do was party or date; work was her focus. (To this day she says she’s happiest at home watching movies with her boyfriend.)

Her dedication paid off and she soon began booking small parts in TV and film. Munn’s big break came in 2006 when she was hired to co-host the G4 network’s pop culture hit show, “Attack of the Show,” (AOTS) which she says put her on the map. “That show is the reason I’m where I am.”

With a solid fan base from her four+ years with “AOTS,” audiences began taking notice when she joined the “The Daily Show with Jon Stewart.”  She was hired in 2010 as their senior Asian correspondent, and the late-night satirical show enabled Munn to stretch her comedic chops. Around the same time she was cast in her first NBC show, “Perfect Couples,” a romantic comedy that lasted only one season, and published her first book, a New York Times bestseller entitled, “Suck It Wonder Woman! The Misadventures of a Hollywood Geek.” The compilation of short stories that she wrote to her younger self was such a hit that she plans on writing a second book!

That year proved to be a big one for the actress. She admits being hired for “The Daily Show” was not a goal she ever thought she’d reach, though she feels extremely fortunate she did.

Her success continued to grow with doors opening up as a result. She landed roles in popular films such as “Magic Mike,” “Iron Man 2,” “I Don’t Know How She Does It,” and Aaron Sorkin’s hit HBO show “The Newsroom.”  “On the ‘Daily Show’ I pretended to be a fake reporter, with Sorkin’s show I was playing a real one.” We’d say her journalism degree came in handy!

“I wanted to be a part of ‘The Newsroom’ because I knew my life and career would change.”  Against the advice of her reps Munn passed on multiple offers for other TV shows before even scoring an audition, holding out hope she’d get her chance. In what can only be described as a “nerve-wracking time,” she turned to Stewart for advice (who, along with Sorkin and good friend Arianna Huffington, she counts as mentors). If she turned down the other offers and didn’t get the Sorkin show, would she regret it? Stewart asked her. Her answer was no. If she took one of the offers and didn’t hold out for Sorkin would she regret it? The answer was yes.  “I came out to LA for a better opportunity, not a better offer,” says the actress.

The gamble paid off and Munn won big. Within two weeks of auditioning she received the official offer and was cast in the role of Sloan Sabbith, a smart economist and financial reporter with two Ph.Ds and undeniably the smartest journalist in the room.

In preparing for the role, the actress admits there was a lot of work done to make the transformation. “I needed to learn and educate myself.”

She describes Sloan as someone who is strong, smart, fiercely loyal, and fights for the integrity of the show. “Her shoulders have gotten bigger in season 3 [the final season], and it’s fun to play someone who always knows what the moral thing to do is,” explains Munn. Like Sloan, the actress is extremely loyal to her friends and the people she loves. “I really connect with her on that level.”

With the show ending its run this past December, Munn says she will miss everyone she’s worked with as well as saying Sorkin’s words and the “Oh my God!” moments that come with reading his scripts and being completely surprised. “It’s so visceral,” she says. He paints a beautiful picture of the work.”

Up next for the star who was named Variety’s 2014 Breakthrough Actress is the action comedy, “Mortdecai” starring Johnny Depp, Gwyneth Paltrow, Jeff Goldblum, and Ewan McGregor, which premieres later this month. Centered on a stolen painting, Munn’s character is a rich girl from LA who comes from new money yet it’s never enough for her. Like everyone else, she finds out the painting is worth a lot of money and wants to get her hands on it.

Now a California girl for nearly a decade, Munn believes being on the west coast has exposed her to things that are good, like taking care of yourself and staying strong and healthy. “There’s a large culture of people here trying to stay young,” she says, noting that the environment has changed her thoughts on food and health. “It’s not what’s on the outside that strikes me; what I find beautiful are when people are most comfortable with their imperfections.”

Aware of how arbitrary and fleeting success can be, Munn is grateful for all she has attained.  Drawn from the good advice she’s received over the years, the actress has come up with a quote for herself: “In the story of life you don’t get to write the whole book, just your character.”  She says she’s proud of the choices she’s made. From this vantage point, it seems like Munn has lived up to another piece of advice from her mentor and friend Stewart: “If you bet on yourself and win, you win big!”