When I think of Paris, two words come to mind – L’amour Toujours –love always. There is something about the city of light that makes women feel sexy and alive. It happened to me the moment I deplaned and took my first whiff of a freshly baked croissant at Charles De Gaulle airport. It’s like an aphrodisiac that induces a ‘je ne sais quois’ state of mind. 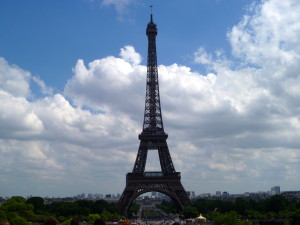 Nothing is more quintessentially Parisian than sitting at a café so I zipped over to The Left Bank, prime people watching territory. I parked myself at Café de Flore in chic St. Germain des Pres (a favorite haunt of Jean-Paul Sartre and Simone du Beauvoir), sipped a vin rouge and took in the show. This ups my fashion quotient more than reading Elle for a year. I love seeing the ever-stylish Parisian women sheathed in au courant hats, scarves and outfits, perfectly accessorized, all with trendy hair cuts – chatting, smiling, drinking and eating. And all so trim, they never gain weight, remarkably.

Inspired, I set forth into the lively streets, passing high-end art galleries, bookstores and specialty shops. Feeling the need for some indulgent retail therapy, I visited the designer boutiques around Boulevard Saint-Germain, Rue de Rennes and Place Saint-Sulpice. After snagging some fantastic finds, I popped into Pierre Herme on Rue Bonaparte to sample some of the city’s sinfully best macaroons.

Delicious Paris, capital of haute cuisine, showcases some of the most extraordinary offerings in the splendor of the city’s palace hotels. Eric Frechon’s Michelin 3-star Epicure is ensconced in the refined Le Bristol Hotel, whose ravishing interiors were the backdrop for Woody Allen’s film Midnight in Paris.

I brunched at this fabulously French high temple of gastronomy, starting with a hedonistic dish of stuffed macaroni with black truffle, artichoke and duck foie gras, followed by melt in your mouth whiting with almonds and spinach flavored with curry and pequillos pepper, topped off with decadent chocolate in a cocoa pod with chocolate sorbet infused with lemongrass. 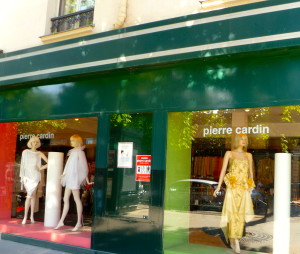 Afterwards it was hard to resist dropping by some of the city’s most exclusive shops like Yves St. Laurent, Pierre Cardin and Hermes seconds away on posh Rue du Faubourg Saint-Honoré, also home of the very cool and edgy Colette.

If you like views with your food, head to Paris’ newest glamour girl, The Peninsula Hotel. This haven of luxury debuted August 2014 after a spectacular four-year restoration of everything from the Belle Époque-style gilding to the trompe l’oeil frescoes. It was here, in the former Majestic Hotel, that George Gershwin wrote “An American in Paris.”

As soon as I stepped into the eye-popping lobby adorned with a bespoke hand-blown Lasvit chandelier whose 800 crystal leaves nearly reach the floor, I knew I had entered the realm of the sublime. This showstopper is glittering, gorgeous and grand. L’Oiseau Blanc, the aviation themed rooftop restaurant delivers superb French fare including scallops from Morlaix’s bay and l’envol, the signature dessert made of a chocolate and raspberry folly in the shape of a biplane engine. Dining with glorious views of the Eiffel Tower as a backdrop is utterly romantic.

Luxury meets whimsy in this distinct Parisian Hotel. Interiors by Philippe Starck evoke the heady days of Paris in the 1930s and  induce a state of gaiety and joy. Fashionistas will love the Royal Eclaireur. This unique space in the lobby – part luxe boutique, part gallery – showcases an original selection of creatively curated clothes, jewelry, art and design objects.

The stunning Park Hyatt Paris-Vendôme, occupies a coveted location on the prestigious Rue de la Paix, within walking distance of the Place Vendome. In other words, shopping galore. You’re delightfully close to Chanel, Ann Fontaine and Galeries Lafayette to name a few.

With sceney Le Bar, sexy Les Orchidées lounge with cozy fireplace, and outstanding modern French gastronomy at Michelin-starred restaurant Le Pur, it’s not surprising this is a favored perch for the Paris fashion show attendees. My dinner at Le Pur of scallops with sesame seeds and citruses, venison with red cabbage, gingerbread and chestnuts plus addictive caramel chocolate cake was magnifique!

I lunched on delectable scallops with litchi and sea urchin followed by a bliss-inducing dish of spaghetti with lobster, truffles and cepe mushrooms. A delectable crunchy grapefruit sorbet dessert topped it off. How do the Parisians stay so trim?

Sundays the action is at the marvelous Marais, where unlike the rest of city, most of the stores are open. Its artsy shops, hipster hangouts, edgy boutiques, trendy bars, cafes and diverse range of cuisines attract an eclectic crowd, from young bohemians to older bourgeois. Shopping enthusiasts like moi flock to ateliers of talented young designers as well as to the showroom of internationally celebrated Martin Grant. The most famous Jewish neighborhood in Paris, the Marais offers artisanal pastries, chocolates, cheese, bread and quiche, plus hummus and baba ganoush to die for.

For me, no trip to Paris is complete without visiting the Louvre’s treasures, beautiful Tuileries Gardens, the scenic Iles anchored by Notre Dame, Musée d’Orsay’s impressionist masterpieces and picturesque Montmartre with its painters and panoramas.

My last night in Paris, I strolled along the lamp post lined riverbank of the dreamy Seine and crossed the Pont Alexandre III bridge adorned with cherubs and nymphs. As I took in this romantic snapshot, the Eiffel Tower magically lit up like sparkling diamonds. If you’re not already in love, when you visit Paris you will be.