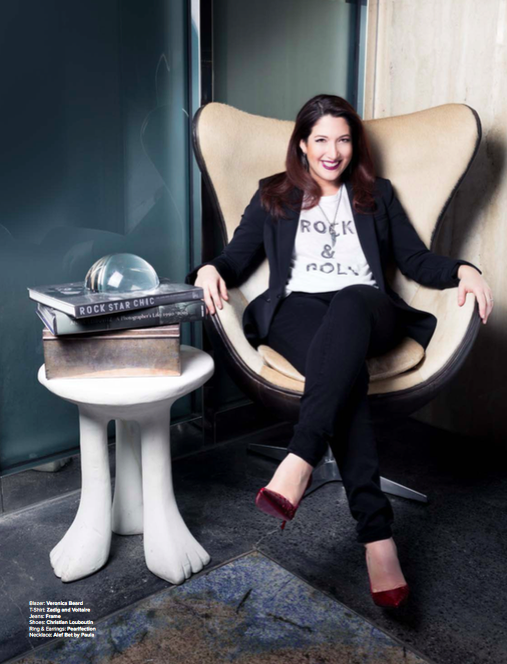 Ranked among one of the “50 Digital Power Players” by The Hollywood Reporter, it’s clear when talking to Randi Zuckerberg that she is breaking ground and forging ahead in the rapidly growing world of technology. Her passion for life and her work is infectious; in talking with Zuckerberg, you can’t help but want to learn more about this businesswoman and mother of two young boys.

“I’m always looking toward amazing women who are doing things in various high places – looking up to them and aspiring to do bigger things,” says Zuckerberg. For all her successes so far, she’s the first to say there’s still a lot more to accomplish.

When she was a young girl growing up in Westchester, Zuckerberg’s dreams for the future were much different than the path she’s since followed. “It wasn’t something I could say I wanted to do because social media and all these innovations I work on every day weren’t even a dream anyone had at that point,” she says.

Instead, she dreamed of a singing career on Broadway. “That was my biggest life dream and I tabled it to be realistic,” she says. “I kept tabling it through my tech career because I felt that’s what people around me wanted me to do.”

With that dream on hold, Zuckerberg’s path led her to Harvard University, where she studied psychology with a focus on business. “Without even knowing it, I was studying how to create a good company culture,” she says. It’s an area that has always been important to her as she advises start-ups and invests in various projects.

Around this time, the computer science era began to emerge. As a freshman in college, Zuckerberg noticed that the seniors who majored in this area were being hired by big tech companies like Microsoft and Google and given six-figure salaries right out of school. “As a woman I felt so far behind that I could never catch up,” she says. “There were no women in the computer science major, and I felt like it was out of my reach.” These feelings of exclusion were what first drove her to encourage women to pursue technology and entrepreneurship.

Living in a Digital World

Fresh out of college, Zuckerberg began her career at the New York advertising agency Ogilvy & Mather, followed by a stint at Forbes, where she worked as a production assistant on the financial TV show “Forbes on Fox.”

It was only a year later that Zuckerberg took a leap of faith and left New York to join her brother at the start-up company Facebook as a marketing director [her brother is founder Mark Zuckerberg] out in Silicon Valley. “I saw myself as a New York girl in the creative industry, and all of a sudden the opportunity was presenting itself to move all the way out to the suburbs of California to work on a tech start-up.”

She describes her time at Facebook as an “amazing experience,” one that affirmed her belief in exploring new avenues. “With technology moving at the speed it is, part of being lucky and successful in today’s society is being open to new opportunities.”

“It really is such a different experience when you are working on something you have ownership in, and are working with people who are hungry, ambitious, and passionate about what they’re building,” says Zuckerberg. One of her proudest moments from that time was work done during the 2008 election and the 2009 inauguration. Social media changed the entire tone of the political conversation and gave a voice to people who up until then had been voiceless, she says.

That opportunity allowed the budding entrepreneur to roll up her sleeves and take on much more responsibility than most at a young age. Her advice for anyone who has the risk tolerance to start a company or work for a start-up is to embrace the opportunity.

In 2011, Zuckerberg was ready to branch out and start making her own mark on the digital world. And in just a few short years she’s achieved a multitude of successes. She is now the CEO and founder of Zuckerberg Media, a boutique marketing firm and production company that works with high-profile organizations and Fortune 500 companies. She also serves as editor-in-chief of a digital lifestyle website, and is a New York Times best-selling author of both a children’s book, “Dot,” and an adult nonfiction book, “Dot Complicated: Untangling Our Wired Lives.” That’s in addition to headlining her own business radio show, “Dot Complicated with Randi Zuckerberg,” on SiriusXM Radio.

This month she’ll star in a new TV show, “Quit Your Day Job,” for the Oxygen Network. The series gives women from all walks of life a chance to take their business ideas to the next level.

“We had a lot of entrepreneurs come through who would have never gotten a chance to walk into a venture capital firm,” says Zuckerberg, who is one of the show’s four investors and mentors. “It’s exciting to me to give a chance to people who would otherwise be overlooked in the industry.”

Indeed, being a mentor is something that’s important to Zuckerberg. “I’ve had a lot of wonderful mentors along the way, and I’m very thankful to all of them,” she says, mentioning  financial powerhouse Suze Orman in particular. She describes Orman as a “woman’s woman” who aspires to empower other women. “She’s a woman who practices what she preaches,” says Zuckerberg.

Educating the Next Generation

Another project Zuckerberg is anticipating is an animated children’s TV show based on her book “Dot,” which will be premiering in the fall in collaboration with The Jim Henson Company in both the United States and Canada.

Zuckerberg is excited to bring the character she considers like a daughter to viewers. She believes that in order for girls to think about a career in tech, they need to see girls in pop culture who are “techies.” It’s also a project she can share with her children.

“My son and I went into his preschool and read ‘Dot’ together to the class,” she says. “To see him looking proud and excited was a really special moment.”

In the course of following her dreams, Zuckerberg has learned some life lessons along the way. She stayed true to her passion for Broadway, making that dream a reality in 2014 with a two-week run in the musical “Rock of Ages.” That inspired her to continue to share her philosophy about goal setting. “If you have a passion for something, don’t be afraid to be a three-dimensional person – your career and your family will be there,” she says. “Don’t shelve who you are to fit into other people’s expectations.”

This past summer, Zuckerberg and her family moved to the city she’s longed to come home to. Settling on the Upper West Side, Zuckerberg says she’s “living the dream.”

“I feel like I can return to New York with my head held high.”

Get Social with Randi!

Written By
BELLA Magazine
More from BELLA Magazine
Getting ready for prom season? Macy’s has a look for everyone, from...
Read More