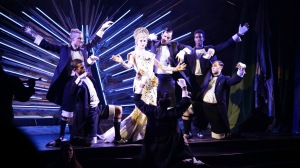 Ring in 2015 at the Diamond Horseshoe, the decadent and glamorous 1940s nightclub beneath New York’s Paramount Hotel.  New York City’s celebrated event planners Brandon Voss and Patrick Duffy are presenting an immersive experience that will blend nightlife with theater at the famed venue. Guests will begin the evening in the opulent Paramount Hotel with an optional four-course prix fixe dinner.  After dinner, they descend to the Diamond Horseshoe for a black-tie masquerade ball featuring a five-piece band, international DJs, performances and lavish theatrics throughout the evening.  Tickets are available now at VossEvents.com. 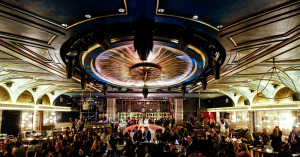 The Diamond Horseshoe was the shining gem of the New York scene in the 1940s. “Me and My Shadow” songwriter and producer (and one-time husband of Fanny Brice) Billy Rose introduced the gilded performance venue on Christmas, in 1938, as a Gay Nineties-themed saloon.  The walls of the main room were painted deep red and white with period fixtures, while the staircase was plastered with posters of bygone vaudeville stars.

It was an instant phenomenon.  Performances featured burlesque acts like the Tiny Rosebuds (diminutive ballerinas with waistband-sized garters) and later, Roses’ legendary Long-Stemmed Roses (chorus girls who had to be taller than six foot two). In 1945, Betty Grable captured the club’s fame in the movie musical Billy Rose’s Diamond Horseshoe.

However, by the fifties, tastes had shifted toward more intimate cabarets and supper clubs.  The Diamond Horseshoe played its last act in 1951.

64 years later, the historic venue has been resurrected beneath the luxurious Paramount hotel to house Queen of the Night, a contemporary revue based on Mozart’s The Magic Flute. The show includes magicians, dancers, actors, butlers, and circus artists performing on every side, leading people from their tables into secret corners and submerging them in the opera’s journey.  The premise may be Mozart, but the presentation is pure Billy Rose.

Brandon Voss’ New Years extravaganza will also follow the spirit of Rose. It will be a feast of sight and sound featuring all-night theatrical performances by the cast of Queen of the Night and early evening music by Inyang Bassey & her live band.  Inyang is the lead singer of the Heathens at Sleep No More.

The later evening will feature a performance by Nomi Ruiz (Jessica 6 and Hercules and Love Affair), followed by a late night dance party with DJ Spun, whose “All Night Rong Party” has developed a worldwide cult following and is one of NYC’s most anticipated events.  He was recently the curator and organizer of MoMA/P.S.1’s prestigious Warm Up Music Series.

“The idea is to take revelers on a sensory journey,” says Voss.  “They can eat and drink at their tables or go exploring and partake in the immersive performances.

“Billy Rose presented a heightened world of what life could be,” he continues. “ It was accentuated with grand style.  Isn’t that how we all want to start the New Year?  We’re launching to the moon this New Years.  And we ain’t coming down.”

Attire for the evening is black tie masquerade.