Hotel Casa del Mar is the perfect place to decamp whether on a business or leisure jaunt. This luxurious resort in dreamy Santa Monica sits right on the beautiful beach, adjacent to the pier, third street promenade and a short car ride to that fashionista favorite, Montana Avenue. It’s glamorous with a laid-back vibe and chic clientele. I forgot just how cool Santa Monica is.

Gazing out the floor to ceiling windows of the lobby’s Terrazza lounge, a golden panorama of the California lifestyle appeared before my eyes: joggers, bikers, skaters, surfers, yoginis doing sun salutations, all against the backdrop of the blue Pacific. 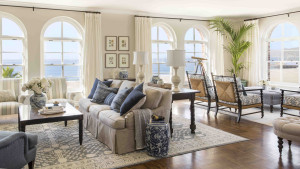 Originally built in the 20’s as a fancy beach club for Hollywood A–listers and the moneyed set, Casa del Mar reopened in the late 90s as a luxury hotel. In 2015 White House decorator Michael S. Smith transformed it into the stunner it is today. 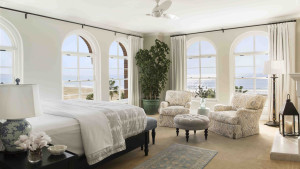 My opulent ocean view suite done in blue, white and cream with posh furnishings and nautical flourishes more than met my requisite creature comforts. The huge jetted tub in the Italian marble bathroom called me to an indulgent bubble bath.

Lobster crudo with black truffles and caviar washed down with a glass of prosecco at Terrazza sated my craving for cuisine. But then, when I heard chef Nunziata hailed from Naples, I immediately ordered a margherita pizza. Ah, La Dolce Vita!

Late afternoon, the hotel’s soaring lobby is the place to be. Its potted palms, bespoke artifacts and cushy furnishings strike the perfect balance between cozy comfort and Hollywood splendor. Amid the well heeled crowd, I watched the light turn a gorgeous hue while sipping a Campari and watching the sun set over the Pacific.

My relaxation quotient definitely increased by having no road nor pavement of any type between me, the sand and the sea. Eco friendly Sea Wellness Spa seduced me with exotic offerings such as a mud treatment infused with diamond dust, a massage using magnetic tools and balancing my chakras with gemstones. So California.

I was elated to learn that Swami Chidinand Saraswatiji, a renowned spiritual leader from India, was visiting a yoga center nearby. I had met him at his ashram in the town of Rishikesh on the banks of the Ganges River some time ago. Sting and Trudy Styler, Uma Thurman and Demi Moore are among his many fans.

At Golden Bridge Yoga in Santa Monica, a gorgeous blonde crowd, looking like actors and models from Central Casting, gathered as musicians played melodious ragas. In walked the eminent Swami with his dancing eyes and contagious smile. We all chanted and meditated before he gave his talk, ‘Drops of Nectar,’ to the rapt audience.

Written By
BELLA Magazine
More from BELLA Magazine
Christmas is my favorite thing to celebrate, and the holiday season is...
Read More