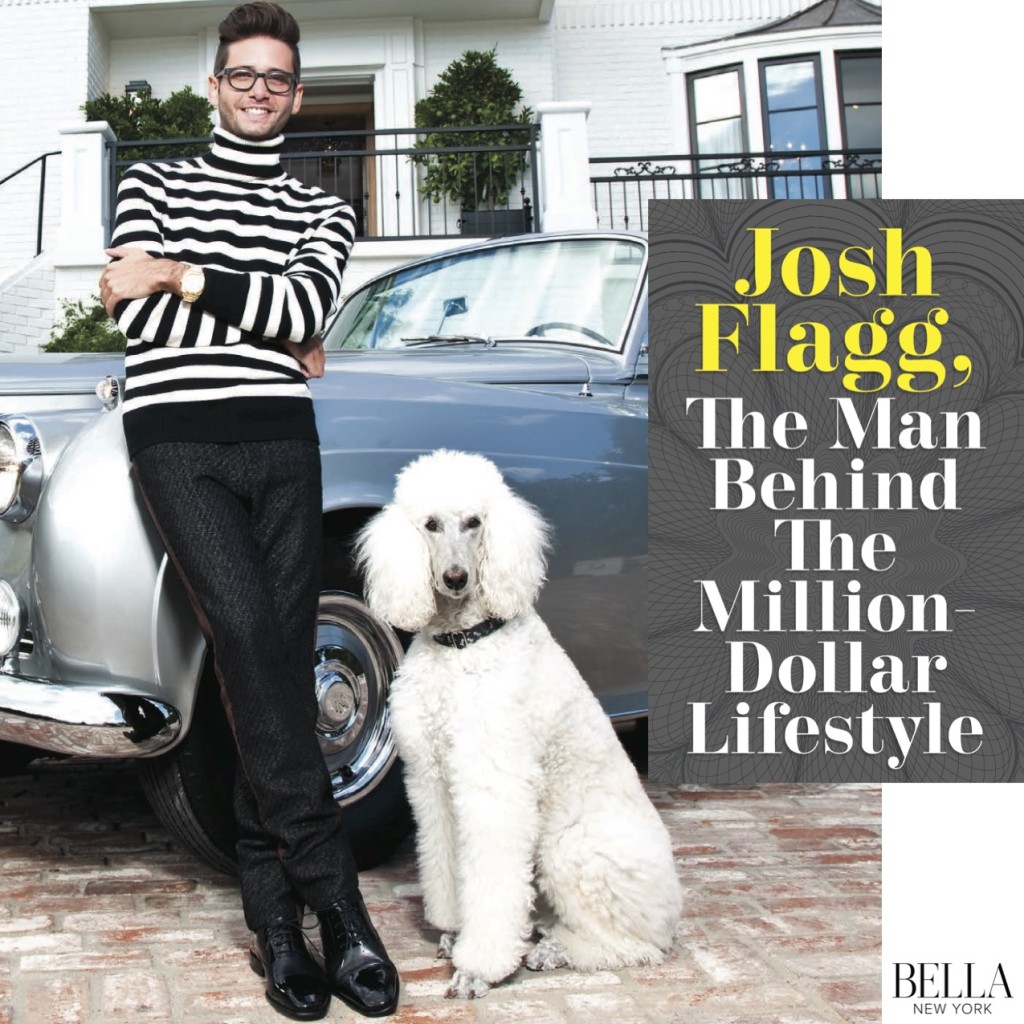 At just 29 years old, Josh Flagg has lived a life most only dream of. Not only is he one of Los Angeles’ most successful and sought after luxury real estate agents, he has also been touted as one of the best in his field by The Wall Street Journal and The Hollywood Reporter, and he made the Forbes “30 Under 30” list in 2012. Having worked with many of Hollywood’s biggest names, including Merv Griffin, Adam Levine, Steve Aoki, and Chicago’s Robert Lamm (to name a few), Flagg has cornered the market of the luxury lifestyle in a town where luxury is the name of the game.

How most of America has come to love this LA luxury broker is through Bravo’s hit show “Million Dollar Listing Los Angeles,” now in its 8th season. Flagg is the only cast member who has appeared on all eight seasons, and the viewers just can’t seem to get enough!

But it doesn’t end there! This dynamo has also authored two books: “A Simple Girl: Stories My Grandmother Told Me,” and “Million Dollar Agent: Brokering the Dream,” and is a collector of fine art, rare automobiles, and high-end timepieces. He is definitely older and wiser than his years, something he learned from his best friend and closest confidant, his late grandmother, Edith Flagg, a Holocaust survivor who later became a world-renowned fashion designer in the 1950s. With a deep love for travel, Flagg and his grandmother spent much time together during his life, following one of their shared passions – travel. Together, they visited more than 70 countries.

Since Flagg was born and raised living “The LA Life,” and with such deep family roots there, I was interested to learn a bit more about the man behind the brand and how he lives (and sells) the quintessential LA Life …

How would you describe the “LA Life”?

Great, although it’s very different from New York. LA is a new city in comparison and we are not affected a lot by weather. Social activities that people do for fun in New York are generally based around the weather, but it’s very different here where you have year-round sunshine. There is also a certain element in New York that you don’t find out here… for instance, we don’t go to polo matches in Los Angeles; I don’t even think anyone knows what a polo match is!  (Laughs.) They probably think when they hear ‘polo match’ that it has something to do with Ralph Lauren.

We do things very differently out here, which is why I like New York so much. I am actually looking for a place there now. [Rumor has it he is looking on the Upper East Side ­– not too far of a stretch from his Beverly Hills life!] It has such different cultures and people, which I think is the greatest thing. LA and NYC are the two of the greatest cities in the world.

What are some of your favorite things about being a real estate broker in Los Angeles?

I think being a very high-end broker in Los Angeles is probably one of the most fun jobs in the world. There is no other city in the world where a real estate broker can be a celebrity. I am not referring to the show; I am referring to the fact that in the city of Los Angeles, talent agents, real estate agents, and art dealers are celebrities. So when you are one of the top brokers in the city, in one of the famous cities of the world – Beverly Hills – there is an element of fun that other brokers might not get to experience elsewhere.

You started working in real estate right out of high school –­ you were just 18 years old! What drew you to the business? How did you get started?

Well, I could’ve been an architect or an interior designer. Those were the two careers I was interested in, but I didn’t want to work for other people designing their homes. I’ve always been kind of a savant when it comes to real estate in Beverly Hills. That has always been my passion ever since I was a child. I can tell you who lives in every single house, when they bought it, how much they paid for it.

I know you have been living at the Four Seasons for a while … do you think you will find your dream house one of these days or are you too busy finding them for everyone else?

No, there is no house that is my dream house because I will have to build it. What I want is something that doesn’t exist. However, I was going to do that ­– I recently bought a house and someone came along and made me a great offer, so I sold it after a couple of months. So now, here I am living in the Four Seasons, and I love it! When I find a great piece of land then I’ll definitely build a house on it.

What would you say is the secret to your success?

Everyone always wonders how to get somewhere in life, and there is no way to do that. You are dealt your cards and you run with it. There are always highs and lows. You just have to let them work out and just roll with it. If the momentum is there you just have to keep it going for as long as you can.

Not that I even need to ask, but what is your favorite LA neighborhood?

What are some of your favorite things to do outside of real estate?

My passions are collecting art and traveling.

I know you were very close with your grandmother Edith; were you two similar?

I am basically a younger version of her. She was a force of nature. She influenced everyone she met, including her grandson. I was raised by my parents, as well as my grandmother. Everything about me stems from her.

I know you two traveled the world together. That must have been such a unique and amazing experience.

We visited 70 countries around the world. We always loved Paris, the south of France … pretty much anywhere in France or Italy. There is nothing like it. You can always return every summer to Europe and never get tired of it.

I know you also wrote a book about her, “A Simple Girl: Stories My Grandmother Told Me,” that you started when you were 14. What made you want to write a book at such a young age? That is quite an accomplishment for someone so young.

People asked her to write books for years but she was never really interested in doing it because it’s not her style. But of course, the one person she couldn’t say no to was me. So I got her to do it with me. It was such a nice thing because she had such an important story but was never interested in putting out a book or a movie about her life.  But I knew it was a story that had to be told.

How do you define beauty?

It is in the eyes of the beholder.

Finish this sentence: Happiness to me is …
Traveling around the world, buying art, and looking for classic cars.