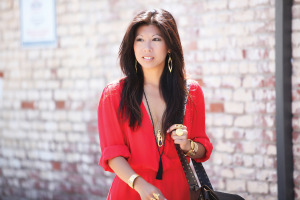 For Yuwei Lee, a journey of self-exploration and healing led to a career she always dreamed about but never thought possible. The west-coast based jewelry designer’s artistic pieces were born after she took a step back to examine her life and aspire a new way to move forward. 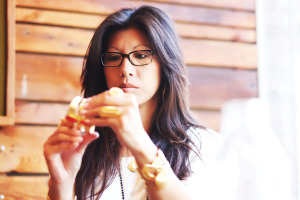 “Designing jewelry isn’t just a career,” Lee explains, “it really stems from the healing I’ve had within myself, and it just happens to look like this.”

Growing up in Saddle River, NJ, Lee remembers wanting to be a fashion designer from an early age. She would play for hours with the popular 80’s toy Fashion Plates, which allowed aspiring young designers to create different looks with the help of a plate, some paper and color pencils, sort of the way Lee still designs today (minus the plates)!

“I am Chinese and for my parents, fashion wasn’t a career choice,” says the designer. Since her parents urged her to pursue something “a bit more stable,”  Lee put her dream on the backburner and went on to holding a variety of successful positions within the corporate world.  It wasn’t until after she became a parent herself that she began to realize she wanted a career that was not only fulfilling but would allow more time at home with her daughter.

“It’s been a long process to have the career I’ve always wanted, and I wish I had the conviction to trust in myself to do it earlier, but I truly believe timing is the key,” she explains. Working in the corporate world gave Lee the business experience she needed to not only launch her brand but also sustain it moving forward.

Before Lee officially left her full-time job, she began sketching and getting things in order. Then, in May of 2013, she took the leap; five months later Yuwei Designs was officially launched.

Once she decided to begin designing jewelry, it made sense to Lee from both a business and personal perspective to manufacture her work in Bali. She traveled there for the first time in 2011 and fell in love with the island.

“There is a large silver-smith area and the craftsmanship is undeniably beautiful,” says Lee.  “They’re true artisans; everything is individually handmade, nothing is done by machine. A lot of time and detail is spent on every piece of jewelry.”

On a personal level, it was important for Lee to have the work done there, since it’s where her journey of healing began. “Being there allowed me to put certain things into perspective, and I realized how little I needed to live my life. It took me out of the material things and I saw that I didn’t need all of that to live a good life.”

When Lee sits down to sketch, she likes to create a relaxing environment by lighting some candles and putting on soothing music, something that has been very therapeutic for her, she says. “I can sit for days and just draw, getting lost in the creative process.”

And while that process is what fuels her, she admits to not having a specific style in mind when starting out. “My inspiration is being a beautiful, powerful woman; from that has come strong, bold designs that have a powerful goddess theme. I think you can be a feminine woman yet still exude power and strength.”

Even when going about her daily life, Lee finds the simplest things might spark an idea. She admits to being “hands-on,” and finds that cutting out shapes and looking at them three-dimensionally helps to visualize the way a piece will look. Sometimes it even generates a whole new idea.

“I have no control over the creative process … it just happens.” She admits to not looking too much at what other designers are putting out there but focusing on designing what she loves and hopes others will feel the same.

Lee’s next collection, slated for the end of the year, will feature a lot of onyx. In most of her jewelry she uses stones of color, ones that have some meaning and importance to her, not what’s “on trend.”

In addition, Lee has also partnered up with the UN Trust Fund to End Violence Against Women with a collection specifically designed for the cause; all proceeds will go directly to the fund.  No stranger to domestic violence, Lee hopes to change its affect on her following her path to healing toward inner peace.

“Domestic violence happens a lot more than people realize, and for me it’s an ongoing, daily struggle. I knew I wanted to help people through my work so after doing some research I contacted UN Trust Fund and everything fell into place seamlessly,” says Lee. “I couldn’t be happier with the way things have worked out.”

For more information on Yuwei Designs, visit YuWeiDesigns.com, as well as the company’s Facebook, Twitter, Instagram and Pinterest accounts. To learn more about the UN Trust Fund to End Violence against Women, visit UNWomen.org/en/trust-funds/un-trust-fund-to-end-violence-against-women/.

Enhance Your Water Intake with These Fun Alternatives

Inclusivity In The Fashion Industry: Designer, Dara Senders, Is Paving The Way