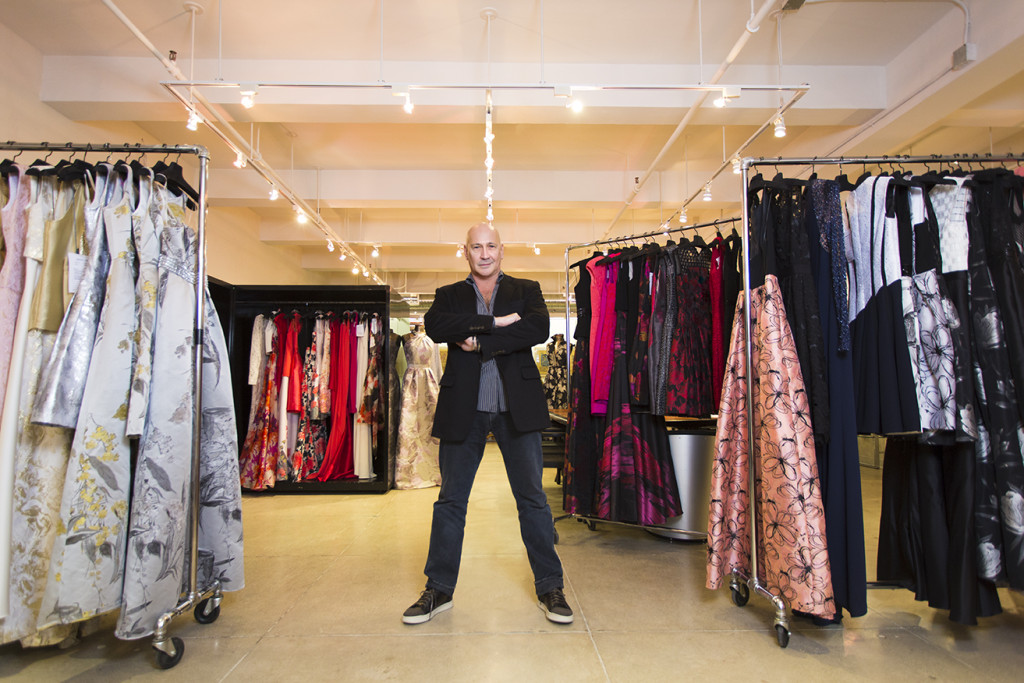 Growing up in Westchester County as the son of an anesthesiologist and a nurse, one would have thought that Carmen Marc Valvo would have gone into medicine like his parents. After all, in the Valvo home, traditional children’s stories and coloring books were supplemented with educational and anatomy-related volumes in hopes their son would follow in the family footsteps. However, this is where Valvo would first develop the formative knowledge of the female figure that would later help him become such a successful and intuitive designer.

Sitting with Valvo amongst his stunning gowns in his new showroom was pretty fabulous, not only because everywhere I turned there were amazing color and designs, but also because this amazing and talented designer is the epitome of a New York gentleman. We began our interview with fun stories about his childhood in Westchester and how his business began 25 years ago with $15,000 dollars and a New York dream. It was truly inspiring to see what’s possible when someone has the passion to make their dreams a reality – no matter what! 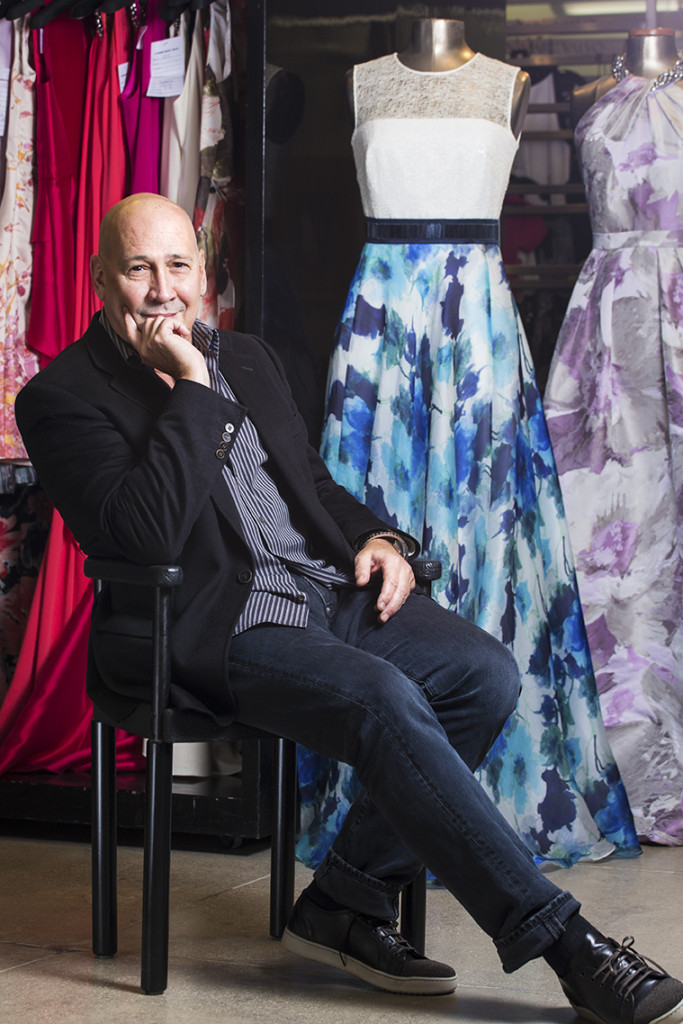 Let’s talk about growing up in NYC. Tell me about growing up in the 60s and 70s.  I am sure it was the most fabulous of times…
Oh, it was amazing! I grew up in Westchester and went to school at Iona Prep in New Rochelle. I was definitely a “good old boy,” but as soon as my friends and I were 16 (even earlier), we would head out to the city because it was so much fun. The east village was really great; there were these jean shops you would always go to. What I miss most about New York in those days is Times Square. I loved the prostitutes. I loved the transvestites. I loved the drugs. I love the sights of it all – all those pawn shops, it was my Disneyland (laughs).

When I first moved into the city I lived on the Upper East Side and then moved to the village, which was fabulous. Then that started to get too expensive (especially as a student at Parsons at the time), so we decided to move to the Upper West Side, which was the “Wild West” 35 years ago. I mean you really didn’t go above 84th Street. I had one friend who lived up there and he would carry a bat with him and swing it around his head as he walked down the street because you never knew when you would get attacked or mugged. Now it’s like everybody has their family there with their strollers and the twins. New York is amazing. It’s always changing.

What’s your favorite thing about being a New Yorker?
I think New York is one of the most inspiring places on the planet because of its diversity and ethno diversity, as well as its neighborhoods. Each street has its own personality. Our new showroom is now on 35th and right across the street they have the cutest little restaurants that you’ve never heard of or saw. There is always something to discover, always something to explore. It’s magical because the people are so unique. The city is constantly moving and changing and evolving, and some of it has to do with fashion. It’s kind of like a long runway.

You have said that you were influenced by being a child of the 50’s. How have you been able to infuse a modern flair into the elegance of the 50s so effortlessly through your collections?
I think that whole concept of the 50s and 60s and how women dressed … I mean “they dressed! – the hats, the gloves … there is something really beautiful about looking like a lady.

Agreed! You don’t find that to be true as much anymore, that’s for sure!
Yes, and now we are in such a dressed-down society but still you want to feel elegant and look put together. Inspiration from the 50s is the nice way to do that – with a modern edge, of course, or [else] it will look like a costume.

What surprises you the most about the person you’ve become?
I don’t know. Sometimes, I don’t know who I am (chuckles). I can’t believe it’s been 25 years.

You are independent and have done all this on your own, which is, I must say, inspirational and impressive.
I started the company 25 years ago with $15,000; we lived off credit cards for about two years.  I didn’t even get my first paycheck until two and a half years after we started. To begin like that, you need to have passion and dedication but you also need to be careful. You need to balance the creative side with the sensible side of being a businessman.

Who or what has been your greatest influence?
I think it was my father because when I decided to go into fashion, he said, “God bless and good luck. If that is what you want to do, you will find a way to do it and make your dreams come true.” Although my father was a physician and could have put me through school, he said I had to do it on my own.  I thought, “You’re kidding me,” but I think it was the best guidance I’ve learned in life. When you have to do it on your own, you really find out how passionate you are about it.

With true dedication and passion, dreams can become a reality. I owe a lot of my success to my father and his philosophy, even though at the time, I thought, “Are you crazy, what are you thinking, Dad?!” I was waiting tables, working two jobs, going to bed at 2 in the morning and waking up at 6, and did that until I got my first [fashion] job. Then I still had to wait tables for a year and half, because I making more money waiting tables then I was as a design assistant straight after school.

Out of all of your collections, do you have a personal favorite?

I really like my current [Spring 2015] collection a lot! It has that 50’s feel that we talked about but it’s all transparent and longer lengths. Other than this collection, there are actually two – the first flower show I did because I love flowers and gardens, so that is kind of a reoccurring theme. That was a really beautiful spring collection from about 11 years ago. The second collection was from five years ago, which is the seashell collection. Everything was inspired by seashells, so it was all spiraling and ruffles kind of how a shell has those fringe edges, but there were no side seams in any of the garments. The side seams were only in the foundation and all the spiraling was done as a road map from point A to B.  It was amazing. Actually, Selenis Leyva from “Orange Is the New Black” wore a custom version of one of those gowns to the Emmy’s last awards season. We did a custom version for her that was really pretty and still timeless. A good gown is a good gown.

I love when you talk about “red carpet moments.” You are talking about the everyday woman’s “red carpet” moments in life and being a part of that.
It’s crazy, I feel like I have gone to more weddings and bat mitzvahs and celebrations than anybody else. When someone buys me to wear to their event, I say, “I am so glad to be going to your wedding, or I am so glad I will be at the affair.” Even though I am not personally going to be there, they still feel like I am a part of it. In life you remember two things on special occasions – what song was playing and what you were wearing.

Beauty is…
Cliché says beauty is in the eye of the beholder. I think real beauty is internal, more internal than external. It is a pose, it’s courage, and it’s the way you present yourself. External beauty is very fleeting; I mean we all will succumb to the gravity of time. Just being a good person, a good soul. They say karma is a bitch and I believe that. We make pretty dresses to feel pretty, but that’s all it is … I want to make women look and feel their best.

Style is…
Oh my God, style is so personal. It’s not what works for you; it’s what doesn’t work for you. I feel like when you know that, then you do not become a slave to trends or a victim of fashion. You just become your own voice.

Written By
BELLA Magazine
More from BELLA Magazine
From November 10-14, Ann Taylor will be hosting its “Friends of Ann...
Read More