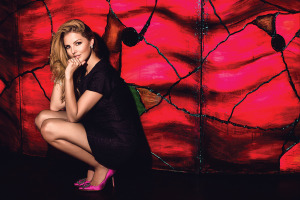 Sweet and soft-spoken, Ainsley Kerr, the “It Girl” of Toronto, is living the life most young fashionistas only dream about. Born and raised in Toronto, Kerr spent five years of her childhood in Japan yet she’s a Canadian girl through and through. With family ties to the fashion business, the well-known socialite explains that fashion has always been in her DNA. Her maternal grandfather managed the men’s clothing at the The Bay, a Canadian department store located in the Vancouver area, while her mother, who was once a model, managed the former Valentino boutique at Holt Rentfrew, Canada’s destination for luxury retail. With an appreciation for beautiful clothing, it’s no wonder Kerr chose to follow in her family’s footsteps.

“I’ve always had an innate love of fashion,” says Kerr. “Growing up I had a ‘trickle trunk’ containing different dresses and costumes – every day was dress-up day.” Kerr still loves dressing up for the numerous events and shows she attends on a regular basis. It’s what she describes as her “favorite part of the day.” 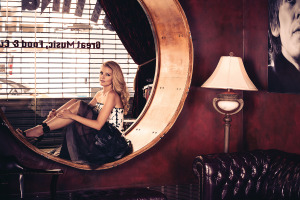 A transformation began to take place when Kerr attended her first solo event a decade ago (she had previously been accompanied by her mother). “It was a turning point for me and I met a lot of creative people.” That evening led to relationships with different Canadian designers and partnerships were formed.

Kerr eventually became a brand ambassador for a number of different fashion lines where it’s her job to not only showcase designers by wearing their clothing but to also connect them with others in the industry, a task she says is a perfect match to her “relationship person” personality

And while Kerr’s style is changing all the time, she says she enjoys catching new designers early on before they really explode on the scene. Then she can watch them flourish.  “It’s exciting to work with those who are new and up-and-coming. I can see the talent coming out of the clothes and know where this is going. I’m catching the excitement before the roller coaster ride!” 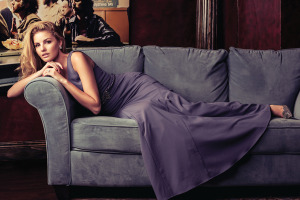 These days Kerr is the face of Caroline Furs as well as their director of development. Led by chief designer Carol Grant Sullivan, the Canadian luxury fur collection showcases glamorous, bold and distinctive looks, including beautiful blankets and accessories for the home, baby, men and women, as well as at bridal and corporates events.

Other designers Kerr has worked with include Lundstrom, Danier Leather, Stephan Caras and Tuck Shop Trading Company. While each line is different, the overall similarity is the design of beautiful, elegant and unique clothing. Kerr has also appeared in campaigns for Danier Leather and Tuck Shop Trading Company and is featured in their current “look book.” Kerr describes Canadian fashion and trends as a blend of the unique styles seen in New York and Los Angeles.  And while she finds beauty in the different styles seen from coast to coast, for her, the true meaning lies within. “Beauty is someone who is unapologetically themselves, comfortable with their imperfections and experienced struggles, yet who has managed to pull through with a deep appreciation for life and a sensitivity and compassion for others.”

When it comes to “glamming” up for big events, Kerr often decides ahead of time what she’ll be wearing. Leaning more toward the dressier side, she generally lets the clothes speak for themselves. When looking to add fun, bold statement pieces to an ensemble, Kerr turns to Toronto jewelry designer and friend Shay Lowe. If the event calls for something a bit more formal, her go-to for jewelry is Myles Mindham, which is headquartered in the posh district of Yorkville. She sums up her style as “simple elegance.”

In addition to the glamour of the fashion world, Kerr has spent the past six years working with a charity that has special meaning to her, Rethink Breast Cancer. Launched in 2001, Rethink is the first-ever Canadian breast cancer charity to bring awareness to the under-40 crowd and the unique needs young women dealing with the disease must face. A year after their launch, Rethink debuted Boobyball, a fundraising event that draws a large crowd of young professionals. As part of the fundraising committee, Kerr has helped raise over a million dollars for the effort. 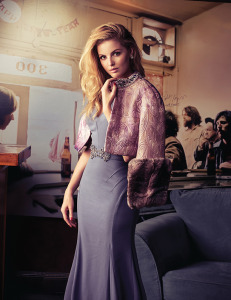 While planning and attending events is something the charming Canadian does with grace and style, her biggest one to date is her wedding this coming November. Taking place at the Khayangan Estate in Uluwatu, Bali, Kerr and her fiancés whirlwind, month-long “weddingmoon” will begin in Dubai and end in Abu Dhabi with stops to various locations including Bali along the way. When talking plans, Kerr admits it took some time deciding whether to have a large affair in her hometown or something a bit more intimate. In the end, her desire to have a bit more freedom and creativity won out. “I want this to not just be a wedding but an experience,” says Kerr.