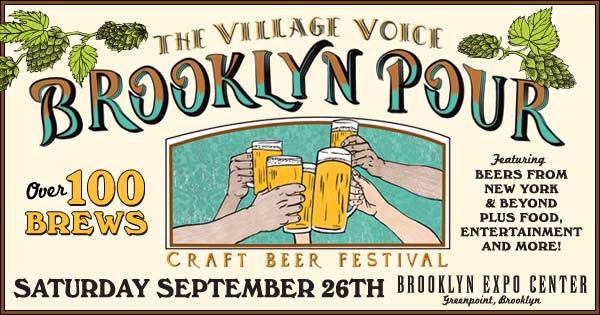 53 BREWERIES CONFIRMED WITH OVER 100 BEERS TO DATE**

Brooklyn Pour will feature over 100 craft brews from New York and beyond plus DJ sets by Jonathan Clarke of Q104.3. The event will be held in Greenpoint, Brooklyn at the Brooklyn Expo Center from 3:00PM – 6:00PM, with VIP hour starting at 2:00 PM. The event will host the Brooklyn Pour Game Zone with life size pong, cornhole and more and an outdoor food court featuring Keste Pizza, Papaya King, Coney Shack and more TBA, in the event’s outdoor courtyard! The Samuel Adams Stein Hoist competition will be returning to the event, hosting a male and female competition – winners to receive prizes and bragging rites. Guests can also enjoy the official souvenir photo booth sponsored by Flat Rate Moving, the Red Carpet welcome sponsored by Fodor’s Travel, Souvenir Tasting Glass by AVA DoBro, the Official Brooklyn Pour Beer Scorecard provided by Asahi and more!

This year’s Brooklyn Pour will feature three tiers of ticket options – all currently available for sale, here: http://bit.ly/BKPour15Tix. All ticketholders will be offered unlimited tasting of 100+ beers, a souvenir tasting glass, entertainment, and an exclusive Brooklyn Pour photo booth. The VIP ticket ($85) will allow guests entry one full hour early at 2:00PM, plus access to the first ever VIP outdoor patio area, including complimentary snacks, gift bags, music and a private sampling area. The Early Entry ticket ($65) will allow guests entry into the main room of the event a full half hour earlier at 2:30PM. The General Admission ticket ($55) allows entrance to the event at 3:00PM until the event finishes for all ticketholders at 6PM. For more details on this year’s three ticket options, visit: www.villagevoice.com/brooklyn-pour.

The Village Voice is calling out to volunteers to join the official 2015 Brooklyn Pour “Brew Crew.” Volunteers will represent Brooklyn Pour in a variety of roles and will be selected based on event experience and knowledge of the event, and dedication. Volunteer applicants must be 25-years-old or older and must apply before, here: http://microapp.villagevoice.com/brooklyn-pour/2015/volunteer.php.

The Village Voice‘s Brooklyn Pour craft beer festival has kept in the true form as its sister tasting event, Choice Eats, by curating local beers unique to New York City, mixed with a portfolio of beers from around the globe all under one roof for one day. Over 1,500 craft beer aficionados will sample the best seasonal, micro and reserve brews from breweries around the country with a pinpointed focus on the tri-state area.

The Village Voice is proud to partner with Badass Brooklyn Animal Rescue for Brooklyn Pour 2015. A portion of this year’s proceeds will be donated to the charity, which is a 501(c)3 non-profit, all-breed dog rescue composed of a network of fosters and volunteers who work together to rescue sweet, loving, adoptable dogs from high kill, rural shelters in the southern U.S. states and get them adopted into wonderful forever homes. For more information, please visit: http://www.badassbrooklynanimalrescue.com/.

For the latest on “Brooklyn Pour” please have a sip here:

The Village Voice has independently produced and created such celebrated events as the Choice Eats, Obie Awards, 4Knots Music Festival, Choice Streets, Holiday Spirits, Brooklyn Pour, as well as the most anticipated issues and guides of the year including the annual Pazz and Jop music poll, Best of NYC, and its Spring, Summer, and Fall Preview guides. The Voice is New York’s most influential must-read alternative newspaper in print and online. For more information on the Village Voice or its events, please visit us online at www.villagevoice.com.

Love Is In The Air with Nonie & Outland Denim

You Need to Try Kassi Club, and Here’s Why…